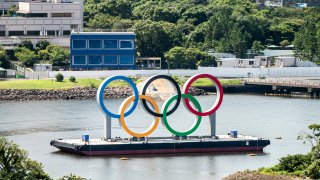 Athletics has just never been my thing. I was actually bullied in middle school for being the one student who refused to run the mile, forcing everyone to run it twice as punishment for my lack of effort.  And I regularly call the NBA finals “that game where they gotta play six times and whoever wins four times gets the ring.”

Yet, every two years, I find myself watching an event like table tennis as if it were the season finale of “This Is Us.”

Just this weekend, I was at my neighborhood nail salon and watching its wall-mounted TV when American fencer Lee Kiefer was finishing her first of three rounds against Inna Deriglazova of Russia in individual foil fencing. I came into this game with no knowledge of Kiefer or Derigalzova and absolutely no understanding of what “foil fencing” even was (still not sure). But at that moment, I was hooked.

Suddenly, all that mattered was this game. And I watched the former 10th place Rio Olympics finisher inch closer to securing a major win as if each broken nail I endured this week was leading me to witness this glorious moment for team U.S.A.

The Olympics, for non-sports fans like myself, is often one of the few times the adrenaline, competition and patriotic pride of these games can catch our undivided attention.

And it seems there might be a reason for this sudden onset of athletic fandom.

Perhaps it’s partially due to the fact that, while I don't consider myself a sports person, “a lot of what’s considered [‘sports’] is not generally what we think about,” says Robert Thompson, Director of Bleier Center for Television & Popular Culture and trustee professor at Syracuse University.

“Most people mean they don't watch the big sports.”

In my case, he's right. While fencing, badminton and skateboarding are unquestionably “sports,” the subject of athletics always brings to mind the major U.S. sports like basketball, football, baseball and soccer, none of which I’m particularly into. But during the Olympics, I’m instantly locked into events like water polo and synchronized swimming.

“Being a non-sports person that doesn't like football doesn’t mean you can’t get into judo or something,” explained the pop culture expert.

Now that doesn’t mean that I’m suddenly going to start following table tennis, but as Thompson explained the “Olympics has a natural tendency to pique interest because of the marketing.”

And it’s not just advertising that can get you excited for the big event. Even with little knowledge of the sports or the athletes, Thompson says the background you hear from Olympics commentators is incredibly savvy “in being able to draw you in.”

“In an extraordinarily short period, you're told this dramatic information and you’ve been indoctrinated into caring about this sport you may not have otherwise heard of," he said.

When Thompson said this, it got me thinking. I remembered that while I watched Kiefer and Derigalzova do their two musketeers thing on television, I heard the commentators describe the reasons why a win for Kiefer would be incredible. Her opponent had won gold back in 2016 and this would be the first gold medal in United States history in individual foil fencing. And just like that, I wanted Kiefer to win. And not just win. I wanted her to completely embarrass Derigalzova.

Don’t we all love a good underdog victory?

In major American sports like basketball, longtime fans know the game and statistics going into each match-up and the rest of us are left without a clue as to who we should care about and why. But the Olympics “creates equity almost instantaneously to get us to care about people," Thompson said.

It’s kinda like reality TV. “The drama is so simple," he said, and there is instant gratification. And unlike sports where many of the players have already made names for themselves and are getting paid millions, during the Olympics we can watch stars be formed “in front of our eyes."

And of course, the Olympics has variety and pageantry. “There’s a lot more to appeal” to someone like me who has little to no interest in games of physical prowess, he added.

Thompson compares watching the Olympics to “the old vaudeville days” where “if you didn’t like an act, 10 minutes later there’d be something else.” Unlike football where you’d be “lucky” if it's over in three hours.

Thompson’s got a point. In the two hours it took me to finish my mani-pedi, I had seen the U.S. play against Japan in water polo, the Kiefer vs Derigalzova fencing match and an event I’ve just been calling “extreme kayaking.” I didn’t even have a chance to get bored.

It’s like Thompson said, the Olympics is good for the “low attention span generation.”

For millennials like myself and members of Gen Z born into a time with so many entertainment choices, the Olympics has a low barrier to entry for our fleeting focus accustomed to Snaps or IG stories.

A recent poll from The Morning Consult found that only around 40% of Gen Z planned to watch the Tokyo Olympics, and while that's lower than the more than 50% of other generations who planned to watch, Thompson actually thinks that number is pretty high.

Back in his day, with so few television options, you really had no choice but to watch the Olympics when it came on. For a generation that grew up with streaming platforms to fit every fancy, “young people have become more expectant of the ability to watch whatever they feel like watching whenever they feel like watching it.” So Thompson thinks 40+% is still a pretty solid number for potential Tokyo Olympics viewers considering all the options young people have.

He might be right. While having my pick of Peacock, Netflix, HBO Max, Hulu and Amazon Prime subscriptions, I expect I'll find myself sucked into more obscure Olympics sports drama before the torch is extinguished next month.