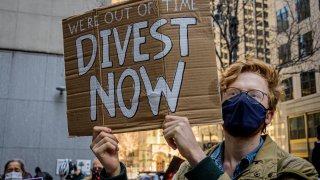 It can feel like 2021 only brought bad news with extreme weather, an ongoing pandemic and many people experiencing financial struggles. Severe storms, largely influenced by climate change, caused roughly $120 billion in damage globally.

January 2021 brought destructive floods to California. A couple of weeks later, a historic winter storm shut down much of the Texas power grid, costing the state nearly $130 billion. The Gulf Coast is still recovering from Hurricane Ida, which caused an estimated $32 billion in damage and hit Louisiana on the anniversary of another historic storm, Katrina. December’s unusual tornado outbreak across the Mississippi River Valley caused another $18 billion and killed nearly 100 people.

But, at NBCLX, we try not to focus on only the bad news. There were at least eight major wins for our planet in 2021.

Days before Christmas, the Environmental Protection Agency announced a big shift in fuel economy. Beginning in 2026, passenger vehicles must get 55 miles per gallon on average. The Biden administration has said this will save more than 3 billion tons of carbon dioxide by 2050 and drivers more than $1,000 over the life of their vehicle.

“Preserving forests and other ecosystems can and should be part of meeting our climate goals,” President Biden told the United Nations at a global climate summit in early November. It was part of the president’s milestone promise to end deforestation in the United States by 2030. More than 110 countries joined in, covering nearly 90% of the world’s forests.

In March, Deb Haaland made history as the first Native American member of the Cabinet. She now leads departments that manage federal lands stolen from Indigenous people during the colonization of America. “This historic nature of my nomination is not lost on me, but I will say, it’s not about me,” Haaland told Congress during her confirmation hearing.

Months later, Haaland recommended expanding three national monuments, which are the ancestral homes of six Native American tribes. The previous administration opened much of Bears Ears National Monument and Grand Staircase-Escalante National Monument in Utah and the Northeast Canyons and Seamounts Marine National Monument in Rhode Island to mining and drilling. But after Biden’s executive orders, they're once again under federal protection.

Plans for two oil pipelines got axed this year. TC Energy called off the controversial Keystone XL pipeline, which would’ve carried dirty tar sands oil to U.S. refineries, and a predominantly Black community in Memphis, Tennessee, celebrated the end of the much smaller Byhalia pipeline through their neighborhood.

Plastics went even more out of style in 2021. Washington state banned polystyrene, which goes into take-out containers, packing peanuts and more. California also banned using the recycling symbol on plastics that can’t actually be recycled. Some estimate that more than 75% of plastic containers can’t actually be recycled, despite carrying the notable recycling arrows.

Oil and gas company Shell faced increasing resistance in 2021 and pulled out of a proposed offshore oil field in Scotland. Shell also must cut its carbon emissions 45% by 2030 after a court order from the Netherlands, its home country.

Marquee names like Harvard University and New York City stopped investing their multibillion dollar funds in fossil fuel. It's a process known as “divestment,” and some environmental activists believe it could be what truly scales back global carbon emissions. Nearly 1,500 organizations have pulled $40 trillion from fossil fuel, according to climate advocacy organization Stand.Earth.