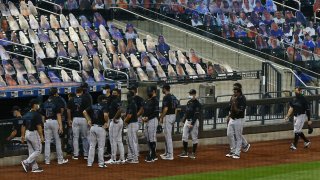 Ownership of professional sports franchises for people of color remains an elusive goal. According to an Institute for Diversity and Ethics in Sports report on the NBA, more than 83% of players are people of color. In the NFL, players of color make up 69% of the league. The report on Major League Baseball found roughly 38% of the league's players are minorities. But those numbers are hardly reflected in the ownership ranks.

Here's a quick look at people of color who have a majority stake in professional sports franchises.

Michael Jordan is a trailblazer when it comes Black ownership in professional sports. In 2006, Jordan joined the Charlotte Bobcats as a minority investor alongside BET founder Robert Johnson. In 2010 the NBA Board of Governors approved Jordan's $275 million purchase of the team (the team changed its name to the Hornets in 2014).

While there are minority investors with minority shares sprinkled throughout the NBA, to date Jordan remains the sole principal Black owner of an NBA franchise.

Then in 2021, the NBA legend announced he would be partnering with Denny Hamlin to own a NASCAR Cup team with Bubba Wallace behind the wheel for 2021.

Does the Gender Pay Gap Between Athletes Show Any Signs of Closing?

Not ‘Sticking to Sports': Athletes Are Fighting for Social Change

Jordan brought a needed touch of diversity to the NASCAR ownership ranks and became the second Black car owner of a full-time team. Brad Daugherty, a former NBA All-Star who is currently an analyst for NBC Sports, is a co-owner in JTG Daugherty Racing. Jordan would become the first Black majority owner of a full-time race team in NASCAR’s premier series since Wendell Scott owned and raced his own cars in the 1960s and ’70s.

The significance of the moment was not lost on Jordan.

“Historically, NASCAR has struggled with diversity and there have been few Black owners," Jordan said in a statement at the time. "The timing seemed perfect as NASCAR is evolving and embracing social change more and more, In addition to the recent commitment and donations I have made to combat systemic racism, I see this as a chance to educate a new audience and open more opportunities for Black people in racing.”

NASCAR Driver Bubba Wallace talks about winning the Talladega last week and the story of the first Black driver to win a cup, Wendell Scott. Scott won in 1963 but was denied a trophy because event promoters did not want to see a Black man pose with or kiss a white trophy girl. Wallace talks about the history behind his win along with his engagement to Amanda Carter.

In October 2021, Wallace would become the second Black NASCAR driver to win a cup. Scott was the first, winning in Jacksonville in 1963, but was not allowed to receive his trophy because event promoters did not want to see a Black man pose with or kiss a white trophy girl.

In an interview with NBCLX, Wallace said he was proud of the win but when it comes to racial justice and representation, "we still have a lot of work to do."

On Nov. 29, 2011, Pakistani-born American billionaire Shahid Khan agreed to purchase the Jacksonville Jaguars for $760 million, making Khan the first member of an ethnic minority to own an NFL team. In his nine years as an NFL owner Khan has become increasingly vocal in his stance for social justice issues. Nine days after the death of George Floyd sparked racial upheaval across the country Khan released an essay denouncing the systemic inequity for people of color that exists in the country.

"Being a Muslim-American made me a frequent target of prejudice, discrimination and hatred. I won't claim to know what it means to be a young African American today, but I can speak honestly and painfully to my own experiences as a person of color for the past 53 years in this country," Kahn wrote. "Even recently, I have had people spew racist language in my presence when talking about other people of color — apparently ignorant of my ethnicity. Change for all people of color in the United States is long overdue, and it must happen now."

Indian American business executive Vivek Ranadivé led a California-based group that purchased a majority share of the Sacramento Kings for $525 million in 2013. The $525 million price was the second-most ever paid for an NBA team. Ranadivé is the founder and former CEO of TIBCO Software, a multi-billion dollar real-time computing company, and of Teknekron Software Systems. Ranadive had formerly been a minority owner of the Golden State Warriors.

In an interview with NBC Sports marking the anniversary of 9/11, Ranadive recalled the days after 9/11 and how he was the subject of racism and fear.

"I had a goatee in those days... and some people, in addition to the color of my skin and how I looked, they assumed I was Arab or Muslim,” Ranadivé recalled. “Of course, this shouldn’t have happened even if I was Arab. But they would sometimes make comments to me like, ‘Look at what you people have done.’”

Kim Pegula is a Korean American businesswoman and President of both the Buffalo Bills and Buffalo Sabres. She oversees the day-to-day business operations of each team and is the first female president of both a NHL and NFL team. On Oct. 8, 2014, Pegula and her husband Terry became only the second owners of the Bills. The couple purchased the Sabres in 2011 and their sports ownership extends to the National Lacrosse League's Buffalo Bandits and Rochester Knighthawks and the AHL Rochester Americans.

Speaking with ESPN in 2020, Pegula said her experience has both a female and person of color in an ownership position has given her a perspective few others have.

"My experiences in a male-dominated sport have been wonderful, for the most part. But there are moments that have been — let's say — unique," she said. I've been mistaken a few times for a fan or a game-day worker, having been questioned and asked for my ID or credential in team areas — and I'm guessing it's because I don't look like a typical NFL owner."

Arte Moreno, a Latino Vietnam veteran, bought the Angels in 2003 for $184 million seven months after the team won its only World Series championship. Currently the team is valued at nearly $2 billion by Forbes. Moreno recently purchased the stadium from the city of Anaheim for $125 million.

An ardent Republican supporter, Moreno was among the speakers at the president’s “Latinos For Trump” event in Phoenix earlier this year.

Marrakech-born billionaire investor Marc Lasry is the Chairman, CEO and a co-founder of Avenue Capital Group. Founded in 1995, Avenue is a global investment firm with over $13 billion of assets under management. Lasry became co-owner of the NBA's Milwaukee Bucks in 2014 after purchasing the team from Herb Kohl for $550 million.

At the time, Lasry had to be talked into the deal, he told CNBC in 2018. But looking back four years later, he has no regrets: “It was a good investment,” Lasry said.

In June 2020, Lasry joined his players and several thousand others who marched in downtown Milwaukee in protests following the death of George Floyd.