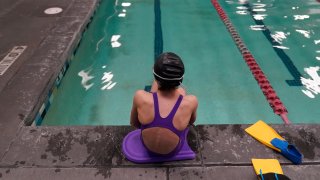 Despite a growing number of athletes coming out as LGBTQ in college, fewer than 3% of NCAA D-I athletes compete in departments that fully protect their LGBTQ identities. LGBTQ youth are also twice as likely to quit sports altogether compared to their cisgender and straight peers to quit sports.

Those statistics are in part why Athlete Ally launched its Athletic Equality Index (AEI) in 2017. The AEI is an ongoing assessment of National Collegiate Athletic Association athletic departments’ policies and practices around LGBTQ inclusion. The report provides a comprehensive look at how NCAA D-I athletic departments are supporting LGBTQ student-athletes, coaches, administrators, staff, and fans.

Anna Baeth, director of research for Athlete Ally, says the goal isn't to call the NCAA schools out, but rather assist them in providing a more inclusive environment for its most vulnerable students.

In compiling its ranking Baeth says they consider a number of factors, including a nondiscrimination statement from the athletic department that they are inclusive to the LGBTQ community; a trans inclusion policy which includes a stated commitment to supporting athletes either as they transition while they're at their institution or if they transition before they become a student-athlete at the institution, a sexual assault or harassment policy; and lastly a fan code of conduct that bans homophobic and trans phobic language in the stands.

Among their key findings:

"We're really looking for the athletic department to create a space where people can have a conversation around LGBTQ inclusion," says Baeth. "I think when people know better, they do better, and I find often that when I talk with athletic departments about the AEI and about their scoring, most people are very passionate about this topic. They want to create spaces where their athletes feel welcome, invited, included."