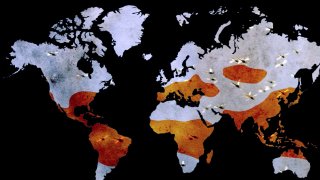 In 2005, NASA biologist Richard B. Hoover went back to a prehistoric time... the Pleistocene era to be precise. It's the geological period that began about 2.6 million years ago and lasted until about 11,700 years ago. It's also the period in which the most recent Ice Age occurred as glaciers covered huge parts of the planet.

“I was in the Fox Tunnel of Alaska, which is a wonderful place that's drilled right back in the permafrost,” Hoover explains. “You walk in and there's a wooly mammoth tusk sticking out of one wall, Pleistocene steppe bison out of another wall and Pleistocene trees over the roof.”

The tunnel, an Army Corps of Engineers project, is a portal to a prehistoric ecosystem preserved in permafrost. Hoover took samples of ice back to the lab; looking for miniature algae called diatoms – but he saw something unexpected under the microscope.

“There weren’t diatoms at all, there were billions and billions of bacteria that were rapidly swimming around just as the ice had melted," he said. "They had been frozen for 32,000 years and they were screaming, it’s springtime!”

What is the Permafrost?

In cold regions, the ground forms two layers. The surface which constantly thaws and refreezes is the active layer. Below that is a layer that stays frozen – the permafrost. Most of Earth’s permafrost is in the high latitudes, under alpine regions that average 28ºF or lower.

But permafrost isn’t permanent. For the last hundred years, Earth’s average surface temperature has climbed. That means the active layer has gotten slightly warmer, which can melt off the top layer of permafrost. Rising temps mean more melting ice. And as Hoover discovered, when ancient ice melts it can release trapped organisms – interrupting centuries of sleep.

Since 2005, humans have found and revived a number of frosty microbes dating from as far back as 100 million years – the age of the T-Rex.

For example, in 2012, Russian scientists recovered frozen plant tissue and used it to grow an ancient flower. In 2013, French scientists resurrected Pandoraviruses – large amoeba viruses. And in 2014 researchers revived the ancient Pithovirus sibericum, the largest virus discovered to date. For reference, Coronaviruses are around 100 nanometers long and Pithovirus is around 1500 nanometers long. Fortunately, it doesn’t infect humans.

These sound scary, but reviving these microbes required modern laboratories and scientists. Dr. Hoover says after a lifetime in the ice, he’s not afraid.

“I have no fear of microorganisms of the permafrost because for one thing they usually are adapted to living in cold environments, and as far as they’re concerned, I’m a ferocious volcano,” he said.

But there are exceptions. In 2016, during a heat wave, something woke up hungry in the ice. A sudden outbreak of Siberian Plague, also called anthrax, killed thousands of reindeer, one child, and hospitalized around 100 humans. But the bacteria that causes anthrax had been eradicated from the region more than 50 years before. Investigators formed a novel hypothesis:

The heat wave had melted a layer of permafrost, exposing frozen reindeer that thawed, reviving the killer bacteria inside them. These ‘undead’ anthrax spores infected grazing reindeer nearby, then people. It would be the first documented case of ‘zombie’ microbes waking up on their own and attacking humans.

“I think there’s no doubt it actually came from a frozen reindeer that had anthrax. Bacillus anthracis is a spore former and anthrax is perfectly capable of remaining alive for very long periods of time,” asserts Hoover. The outbreak raised concerns about other diseases we thought we eradicated.

“Smallpox is another organism that can be kept alive in permafrost... as is the Spanish flu virus,” Hoover says. “You don’t want to go around, certainly in areas where humans have been dead, killed by disease and then buried in the permafrost because those disease organisms could still be alive for very, very long periods of time. Perhaps even going back tens to hundreds of thousands of years.”

So our planet’s surface is getting hotter and ice and permafrost are melting. But a study published by the American Geophysical Union raises another concern: our summers are lasting longer and winters are getting shorter.

This extra heat doesn’t only affect frozen organisms. There are other microbes, already awake and spreading. As cold regions heat up, they become new habitats for disease-carrying vectors like mosquitoes, fleas and ticks – and longer summers provide them with an extended breeding season. By the end of the 21st century, these insects are projected to carry killer microbes to around 1 billion more people.

It seems heat, a vital element for most life on Earth, is giving microscopic life more ways to spread. Like most living things, its habitats are changing, forcing it to seek new ones. And though not all microbes attack humans, they do end up in the environment, infecting other life – potentially disrupting delicate ecosystems.

So considering how viruses play into our current complications, why dig them up and revive them? Why even tempt thawing any potential pandemic popsicles?

“Well, every time you study something new, you find new information that can be helpful in the future, you don't necessarily know at the instant that you discover a new species of life, what is going to be useful for,” explains Hoover.

For modern humans, these microbes can be our chance to learn, to form a plan in case an ancient killer microbe ever wakes up.

“Each of these new discoveries may take years, maybe decades, maybe even centuries before we will have a full understanding of what the benefit of it is going to be,” Hoover says.

But to see that benefit, we first have to survive the coming centuries. Humankind alone turns the wheels of climate change, and the bugs respond. This means our most serious threat isn’t from microbes waking up to reality – it’s from humans who refuse to.