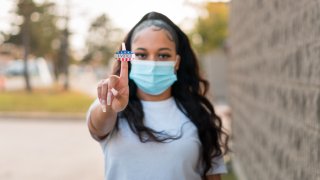 Losing Virginia's governor race isn't the only development from Tuesday's elections that has Democrats concerned heading into a vital midterm year. Turnout among their youngest, most progressive voters was down by stunning numbers in an otherwise high-turnout gubernatorial race.

The share of votes coming from Virginians under the age of 30 was just 10%, according to preliminary NBC News exit polls. Last November, the same age group accounted for 20% of Virginia votes.

Initial estimates, based on the exit polling, indicate voter turnout among adults under 30 dropped by approximately 62% in Virginia from 2020 to 2021, compared to a 15% drop among voters 30 and older.

It’s a warning sign, as well as a bit of a paradox, for Democrats.

Gen Z-ers, voters more likely than any other generation to support Democratic candidates, according to Pew, are also now the voters most likely to say they no longer support the job performance of President Joe Biden and other established Democrat leaders.

Data on young voter turnout in September's California recall election, recently obtained by NBCLX, also revealed a substantial drop. Turnout among voters under 30 fell by approximately 48%, compared to the 2020 presidential election. The share of ballots from those young adults fell to just 12% of the electorate, down from 17% last November, according to the California secretary of state’s office.

The turnout numbers, as well as recent polling, suggest Democrats may be suffering due to young progressives' frustrations over the glacial pace of progress in fulfilling Biden's campaign promises on social programs, climate change and civil rights.

While the young voter drop-off didn’t stop Newsom from surviving his recall election by a 24-point margin, Democrats trying to preserve their narrow eight-seat House majority don’t feel like they have any room for error in 2022.

“Democrats are going to face devastating consequences in the midterm elections if we do not deliver for the people,” said Rep. Mondaire Jones (D-NY), one of the youngest members of Congress at 34 years old. “Most people intuitively believe that when a party has unified control of the federal government, including majorities in both chambers of Congress, that they should be able to act swiftly, especially on the priorities that they campaigned on.”

Only 43% of Gen-Z voters approve of President Biden’s job performance, compared to 51% of Millennials, 46% of Generation X and 45% of Baby Boomers, according to an October poll from Morning Consult and Politico.

For Gen Z, that represents a nearly 20-point drop in approval from June, when 62% of adults 18-24 gave Biden the thumbs-up, compared to 59% of Millennials and 51% of both Gen X-ers and Baby Boomers. Polls ahead of the California recall election showed similar dissatisfaction among young voters for Gov. Newsom, despite him frequently being painted as too liberal by conservatives in other parts of the country.

It may have been one of the factors that reportedly led the president to tell Congressional Democrats that “the House and Senate majorities and my presidency will be determined” by the party’s ability to end the stalemates over his bipartisan infrastructure and Build Back Better plans.

Slow progress is nothing new in Washington

Young voters are also dissatisfied with leading Democrats, such as House Speaker Nancy Pelosi, a San Francisco native also painted for decades by conservatives as too liberal, but who’s recently been criticized by progressives for not doing enough to forcefully pass Democratic priorities. Her approval rating among Gen-Z voters (23%) was far lower than among any other generation, according to the Morning Consult/Politico poll.

But progress has often been slow in Washington, even for presidents attempting a less ambitious agenda than President Biden.

“Some of the significant issues that we saw change in the 20th century, [like] the voting age lowered to 18, that took decades to happen,” said Abby Keisa, deputy director of the nonpartisan Center for Information and Research on Civic Learning & Engagement (CIRCLE) at Tufts University. “Part of making important structural changes towards more equitable democracy and stronger communities means staying in the fight.”

“[Gen Z] cares very deeply about these issues,” said Carolyn DeWitt, president and executive director of the nonpartisan advocacy group Rock the Vote. “[They’re] starting to reach this tipping point of no turning back, and they're the ones who are inheriting these messes. They want bold action on them, and they want that fast.”

But a Senate majority that needs 50 votes can only move as fast as the 50th-most-progressive member wants it to move. And in this Senate, where there are only 50 Democrats, that often makes moderate Joe Manchin (D-WV) from deep-red Appalachia the fulcrum for any spending bill.

Other legislation that proposes to change policies, such as voting rights and energy regulation bills, require 60 out of 100 Senate votes to break the infamous filibuster, a reform-busting mechanism that can be used to delay a bill indefinitely with only a 41-member minority supporting it.

A small number of moderate Democrats, much like Republicans in previous sessions, have vowed to protect the filibuster, despite increasing pressure from progressive Democrats who say it’s hurting American families, as well as democracy.

Progressives also push back against claims their party needs to protect the filibuster for the future when they may be in the minority again.

“We've got two senators on the Democratic side who are refusing to support reforms to the filibuster,” said Jones. “It is a slap in the face to young people who worked hard, who came out in unprecedented numbers to deliver majorities in Congress to Democrats, and of course, deliver the presidency to Joe Biden.”

It’s not that Biden’s resume is devoid of fulfilled progressive promises:

It’s just that those accomplishments aren’t enough for some young progressives who believe the window is closing on a rare opportunity to pass once-in-a-generation transformational legislation.

Gen Z is activated but disengaging from major parties

That includes organizing on TikTok, Twitter and alongside presidential motorcades.

“Youth organizations are thinking about elections and voting as one of many strategies, not [putting] all of their hopes for significant change on one tactic for affecting ... the traditional political system.”

Keisa and DeWitt both said the shift in tactics coincides with a shift away from both the Republican and Democratic establishments and more toward specific policy priorities.

“In some of the recent research that we released ... showing that you're making progress matters a lot,” Keisa said. “The White House needs to make that argument.

“This particular White House was helped significantly by young voters in the 2020 election ... and they cannot wait every two years or four years to be speaking with young people. This has to be an ongoing conversation about issues, especially on issues ... young people are experiencing that [affect] every single day.”

The research suggests the Democrats’ threats aren’t necessarily Republican gains; the GOP is also failing to connect with young voters.

Even though a third of all voters under 30 cast ballots for former President Trump last year, CIRCLE found the Republican Party and Republican candidates were significantly less likely to try and reach out to young voters than the Democratic Party and Democratic candidates.

If there’s any constant in American politics, it’s that voters tend to have short memories. Democrats hope that fact — and the passage of the president’s Build Back Better plan — will together reengage young voters ahead of the 2022 midterms and turn unfavorable polling numbers into favorables.

Noah Pransky is NBCLX’s National Political Editor. He covers Washington and state politics for NBCLX, and his investigative work has been honored with national Murrow, Polk, duPont, and Cronkite awards. You can contact him confidentially at noah.pransky@nbcuni.com or on Facebook, Instagram, orTwitter.