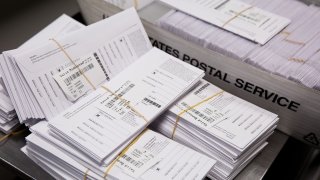 The U.S. Postal Service isn’t delivering mail as quickly as it should, but the delays don’t appear significant enough – at this time – to disrupt an election, according to a September test by NBCLX and NBC Owned Television Stations.

Following a similar test in August, NBC and Telemundo stations teamed up to send more than 400 first-class letters across a dozen major U.S. metros, as well as across the country, on September 11.  For a second straight month, the USPS successfully delivered almost all the letters within a week.

Isolated breakdowns contributed to some of the more extreme delays, including a batch of letters that sat at a Dallas post office for three days before getting postmarked and shipped out, as well as a pair of letters that were still missing two weeks later.

The NBC/NBCLX findings mirrored the findings of a Senate report, released by Sen. Elizabeth Warren (D-Mass.) and Sen. Bob Casey (D-Pa.) earlier this month, which criticized Postermaster General Louis DeJoy’s administration for changes that led to a slowdown of U.S. mail this summer. The report focused on delays on 18-32% for prescription medications, equating to about 1 extra delivery day.

“We've (received) over 109,000 letters since July 14 on this topic,” Sen. Casey told NBCLX. “People (are) in life-threatening situations, with prescription medications that are delayed, and it's attributable to the changes made by the postmaster general. It was not happening before that.”

With coronavirus concerns expected to prompt more Americans to vote by mail than ever before, delays could lead to hundreds of thousands of ballots nationwide going uncounted due to missed deadlines.

But the Warren/Casey report did not specifically mention election mail, nor did not address why the mail slowed down this summer.  It did not mention DeJoy’s August explanations for the delays, which he told House and Senate leaders were temporary, largely due to nearly 10,000 USPS employees contracting coronavirus and new, more efficient truck schedules.

“I worked with the team to get those trucks to run on time with the mail in 'em,” DeJoy told David Rubenstein at an Economic Club of Washington DC event last week.  “That was a good plan. We could've had a better execution; we're recovering from that right now.”

DeJoy also pushed back on claims that he slashed USPS overtime, saying it’s at the same 13% in September as it was when he was appointed Postmaster General in May. And he said the man who appointed him, President Trump, was wrong to suggest the Postal Service could not handle tens of millions of mail ballots this fall.

“When the president goes into that…he's incorrect,” DeJoy said. “The American public needs to know we are prepared and committed to deliver election mail.  We have plenty of resources for the election and we will handle the election; the whole organization is committed to that.”

Republicans on Capitol Hill have also expressed confidence in DeJoy and the USPS’s ability to deliver mail ballots in a reasonable amount of time.

“Are there some issues?...Yes,” said Sen. Ron Johnson (R-Wisc.), the chair of the Committee on Homeland Security and Governmental Affairs. “I think they're blown way out of proportion…(they’re) certainly not being caused by the new postmaster general.”

The veteran Republican senator also joined Democrats in recommending voters mail ballots well in advance of the election – a message that seems to be resonating; an NBCLX/YouGov poll conducted in mid-September revealed 57% of voters who planned to vote by mail indicated they would submit their ballots one month or more before Election Day, Nov. 3.

A USPS inspector general audit on election readiness found postal distribution centers handled election mail inconsistently – and sometimes unreliably - during the primaries. It also put some of the responsibility for delays on local election offices that continue to wait too long to mail voters ballots or continue to use ballots that aren’t easily processed by USPS machines.

U.S. Postal Service spokesman David A. Partenheimer said the agency is prepared to handle the election.

A report by the federal Elections Assistance Commission following the 2016 presidential election concluded far more mail ballots were rejected because of non-matching or missing voter signatures (48%) than for missed deadlines (23%).

If the NBCLX/YouGov poll is any indicator, the increased attention on mailing ballots early – and the ability in some states to cure problems with signatures or other mistakes, if time allows – could actually lead to a lower rejection rate in 2020 than in years past.

NBCLX and NBC Owned Television Stations will repeat the first-class speed test one more time, in October, as the USPS sets out to deliver millions of mail ballots cast for Joe Biden or Donald Trump.