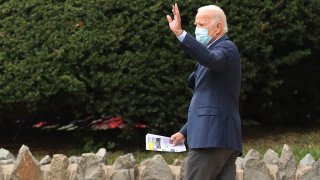 Holy Grail or pipe dream. Pick your hopeful phrase and it probably applies to Democrats' desires for the past several decades to flip Texas blue. The Lone Star State last backed a Democrat for president in 1976, and Republicans have held state legislative chambers and the governorship since 2003. For the last 44 years Texas has been as red as a state can get.

But, in the months before the election the Democratic National Committee started making noise about Texas... making noise, wondering and planning. And that planning appears to be bearing fruit.

In a Quinnipiac poll released today, former Vice President Joe Biden is in a tied race, 47% to 47% among likely voters, with President Donald Trump in the reliably red state of Texas. This compares to a September 24 poll of likely voters in Texas that showed Trump with 50 percent and Biden with 45 percent.

In February, the DNC announced it was adding Texas to its list of battleground states it was targeting in 2020, making the the state's Democrats eligible for multimillion-dollar investments from the party. “The DNC is making historic, early investments to build strong, multiple pathways for our eventual nominee to win in November and support Democrats at every level of the ballot,” DNC Chair Tom Perez said in announcing the placement of Texas on the list.

Why the Democrats Winning Back the Senate Would be a BFD

Why Lindsey Graham Losing His Senate Seat Would Be a BFD

Polls have been tight. Political money has piled up. Millions of new voters are on the rolls, and Jill Biden even flew in for an 800-mile campaign swing that stretched from El Paso to Houston. Taken together, all signs point toward November's election being the closest in America's biggest red state in decades.

Losing Texas would amount to an existential crisis for Republicans, who have won every statewide race there over the past 25 years. But it's not just the White House that may be in play. Republican Sen. John Cornyn is in the first real reelection fight of his career against Democratic challenger MJ Hegar. And according to NBC News Democrats may have a real shot at the Texas State House in November.

Presidential Debate 2020: Why the Final Trump-Biden Showdown Is Worth Watching

Over the past 25 years the Texas State House has passed some of the nation's toughest immigration crackdowns and abortion restrictions. It would be a steep climb for the Democrats – they need to gain nine more seats out of the total 150 on the ballot – but Texas looks different in 2020 than it did four years ago, when Trump won it by nine points. Congressional seats held by Republicans are also in play as more women voters peel away from Trump and the suburbs turn purple.

Texas has added more than 1.5 million voters since 2016, a surge driven by the growing and rapidly changing suburbs where Democrats are staking their party's chances. Beto O'Rourke, the former Democratic congressman who came within 3 points of ousting Republican Sen. Ted Cruz in 2018, said Biden doesn't need to spend tens of millions of dollars because outside groups are pouring money into other races in Texas and mobilizing Democratic voters.

“I just want to encourage them to do more of it. It is helping their case," O'Rourke said of Biden's spending in Texas.

He added, “There’s a certain inertia that is born of 44 years of, you know, losing Texas and our Electoral College votes. It’s totally understandable to not know that this is now a different electorate."