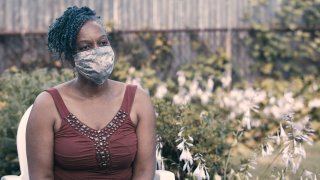 When Jackie Gordon was forced to stop knocking on doors back in March because of COVID-19, the political newcomer had to drastically change her strategy for winning New York’s 2nd Congressional seat, a hotly-contested race on Long Island’s southern coast.

She turned to her training as a yoga instructor.

“It was helping me deal with being sequestered at home...so it was just natural for me to offer it up,” said Gordon, a Democrat, who started engaging with voters by teaching yoga classes over Zoom. “The first session, we had 20 people sign up, and it just continued to grow and grow and in the largest session, we had over 100 people.”

Her opponent, Republican Andrew Garbarino, faced the same challenges. A four-term state assemblyman, Garbarino had to throw every tool of the political trade he’d learned over the years - meeting constituents, shaking hands, handing out brochures, and raising money at cocktail parties - out the window.

“You go knock on some of these doors, they're more likely to come out and throw water on you,” said Garbarino, who pivoted to more online campaigning and in-person events like PPE drives for first-responders. “You know, it's just it's a different world. It's that way for everybody. But it's not what I'm used to.”

For the last five months, aspiring politicians across the country have been calling audibles on their original campaign plans and replacing them with “the new normal” as they adjust to campaigning amid coronavirus.

“(The pandemic) has basically upended political campaigning as we know it,” said Jean Sindzdak, Associate Director of the Center for American Women and Politics at Rutgers University’s Eagleton Institute of Politics.  “It's a lot harder for candidates to make a name for themselves and get known to voters if they can't actually meet them face to face.”

The challenges have led many candidates to innovate with virtual events and online video, like Montana candidate for Superintendent of Public Instruction, Melissa Romano, who reads stories to children on Facebook. It’s also led social media stars like Alexandria Ocasio-Cortez and Donald Trump to rely almost exclusively on their digital tool belt to campaign ahead of this fall’s election.

But as challenging as COVID-19 has made campaigning for the veterans who are accustomed to rallies and in-person events, the pandemic has made life particularly hard for political newcomers running for office for the first time.

It’s hard to twist arms when you aren’t allowed to shake hands.

“It's almost impossible to run for Congress these days without raising millions of dollars, unfortunately,” said Sindzdak, noting the pandemic is making it particularly hard for candidates to hold fundraisers.

And with COVID-19 dominating the news each day, it’s also hard for someone who isn’t in office to introduce him or herself to congressional districts, which often span hundreds of square miles.

“If you want to have a press conference about potholes, probably no one's going to show up about that,” Sindzdak said.

Some newcomers have proven it’s not impossible to make a name for yourself in a socially-distanced world: Jamaal Bowman upset longtime Congressman Eliot Engel (D-N.Y.) in a June primary, and Cori Bush knocked off 10-term Rep. William Lacy Clay (D-Mo.) in St. Louis.

But upsets are still the exception, not the rule.  Political watchers estimated 90 percent of incumbents will win their Congressional races.  One veteran consultant predicted the pandemic - despite all the unpredictability it has created - would bring to the political world “massive incumbent protection.”

Some candidates ready for return to normalcy

While many candidates - from Joe Biden to many local candidates in communities where COVID-19 still runs rampant - are largely staying off the campaign trail, others have been anxious to return.

President Trump held the first of a series of in-person rallies in Tulsa on June 20, and the campaign is now knocking on more than a million doors per week, according to POLITICO.

Out on Long Island, Garbarino, an attorney, and Gordon, a combat vet and retired school counselor, have started returning to a limited number of traditional campaign events - at a social distance.  Garbarino recently led a “Back the Blue” march while Gordon held an outdoor event to hand out yard signs.  They’re jockeying to replace 14-term Congressman Peter King (R-N.Y.), who announced he would not seek another term last year.

“I've always been told I'm better in-person,” Garbarino said, laughing.  “That personal connection makes a difference and people can look into your eye and see whether or not you're being truthful, or you're full of it.”