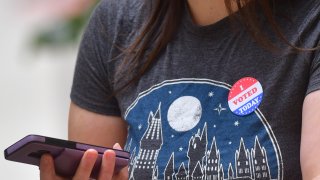 Americans appears more motivated to cast ballots than any other election in at least a decade, and that includes Gen Z and Millennial voters between the ages of 18 and 39. However, the bar for youth engagement is so low in America, it masks the fact that turnout among young voters still lags far behind that of their Baby Boomer and Silent Generation counterparts.

An NBCLX analysis of early voting reports through Oct. 27 indicates only 13% of voting-age Americans under the age of 30 have cast ballots so far, and only 19% of those between the ages of 30 and 39.  Comparatively, approximately 47% of all Americans 65 and older have cast ballots with a full week of voting left to go.

Historical trends indicate young voters are more likely to vote closer to Election Day than older voters; a trend that is likely to be more pronounced in a year where a pandemic disproportionality threatens older Americans who may prefer to avoid polling places.  However, trends over the past four decades also reveal young voter turnout always lags far behind that of older voters – a symptom of America’s poor record of election participation.

Signs of hope among young voters

For as low as 2020’s Gen Z and Millennial turnout may be as of late-October, there are lots of positive signs about voter engagement under the age of 30.

According to TargetSmart, the share of ballots cast by young voters under 30 in 2020 (10%) is trending ahead of where it was at this point in 2016 (8%).  The share of votes cast by Americans between the age of 30 and 39 is also up by two points (11% in 2020; 9% in 2016).  So while the number of early ballots cast is surging across all demographics in 2020, the increase in Gen Z and Millennials engagement is slightly higher than that of older Americans.

It’s also hard to predict what kind of youth voting surge could be seen on Election Day, when many older voters may choose to avoid crowded polling places.

Recent polling shows young Americans are extremely motivated to vote out Donald Trump – even if they don’t love Joe Biden. And increased political activity on social media platforms like TikTok, Snapchat, and Instagram have helped compensate for the loss of youth voting drives, largely eradicated by COVID-19.

The Center for Information & Research on Civic Learning and Engagement (CENTER) at Tufts University reported on Monday, “youth interest and participation in this year’s election is at historic levels, as a rising generation of young people seek to act on their power to drive political change on issues they care about.”

Surveys have found young voters favor Biden by 30-to-40 points over President Trump, so Democrats have the most riding on their turnout numbers.

But unlike previous elections, where seniors were a reliable source of conservative votes, numerous polls indicate voters over the age of 65 are breaking toward Biden in many key swing states. According to Charles Franklin, director of the Marquette Law School Poll, Americans between the age of 65 and 75 turn out at the highest rate of any age group.

For Democrats, the low turnout thus far among young adults represents an untapped opportunity with a week to go before Election Day. But Republicans will be eyeing their opportunities as well – particularly among Gen X voters, who may be easier targets to get to the polls on Nov. 3.

NBCLX analyzed data from the U.S. Census, NBC News, the U.S. Elections Project, and TargetSmart to approximate generational turnout in 2020.