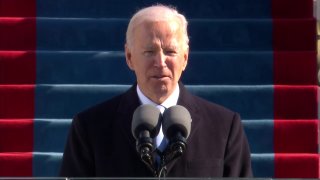 Not all heroes wear capes. And they don't all seek the nearest microphone or television camera after their heroic deeds. Despite choosing to remain silent after his brave actions during the Capitol Hill siege earlier this month, Eugene Goodman, the Capitol Police officer who intervened to prevent a mob from entering the Senate chamber during the riots, did receive a brief moment in the spotlight as he escorted Vice President-elect Kamala Harris to her inauguration.

Goodman drew widespread praise for a video that showed him purposefully baiting a mob in the opposite direction of the Senate chamber doors, beyond which lawmakers were still hiding. Five people were killed in the riots, including another police officer.

"Twenty years from now, when I remember that day, Eugene Goodman will be my first thought," wrote one Twitter user.

"We need a Eugene Goodman documentary @netflix," wrote another.

And yet another Twitter user added, "I hope I am not the only one who believes Capitol Police Officer Eugene Goodman deserves the Medal of Freedom. His courageous action during the riot saved lives. I hope he will be rewarded for it."

The images of Goodman spread via social media and news sites, a foil to the bloody and messy scenes elsewhere at the Capitol. People called him brave, impressive, effective.

Throughout it all Goodman has been silent. The head of the Capitol Police union said only that Goodman didn't want to talk to reporters. Spokeswoman Eva Malecki said the Capitol Police isn't giving interviews or discussing Goodman’s actions.

But there may be one last public reward for Goodman. A Republican and two Democrats in the U.S. House introduced a bill last week to give him the Congressional Gold Medal.

“If not for the quick, decisive and heroic actions from Officer Goodman, the tragedy of last week’s insurrection could have multiplied in magnitude to levels never before seen in American history," said Democratic U.S. Rep. Emanuel Cleaver II of Missouri.

The Associated Press contributed to this report