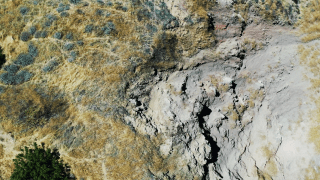 In the mountains just above Fillmore, California, a fire has been burning for more than a decade underground. The Ventura County Fire Department gave the underground blaze the name the "Anomaly" in 2008 when it was first discovered. The fire stretches across six acres of land on a steep mountainside miles away from the town.

"Looking at it, you wouldn't even know it was here," said Mike Des Forges, an engineer with the Ventura County Fire Department which every so has to respond to a vegetation fire caused by the "Anomaly." "The theories of how it got started are all over the place," said Des Forges.

Throughout history, underground fires are more common than you may realize, especially in Southern California, where Monterey Shale and landslides are frequent.

On the Rebound: Small Businesses Creatively Pivot in Wake of Pandemic Shutdown

"They're common in a sense there are a number of occurrences that have been documented," says James Boles, a retired geologist from the University of Santa Barbara. "They're not widespread; they do occur where you have organic shale and landslides, " he says." But as history shows, there is another way... accidental.

In 1962, Centralia, Pa., was like any coal town on the East Coast. "Like many of the old coal towns, there were several abandoned underground mines," said Philip Mosley, a professor at Penn State University.

On May 27, 1962, the Centralia Fire Department, like they always did, set a mound of trash on fire just outside the town. "It was a convenient spot to burn garbage, but it proved to be a catastrophic decision to do that," said Mosley. " Once the fire got burning down there, there was no way of stopping it."

Through the years, the fire would slowly work its way up the mine towards Centralia, eventually forcing residents to vacate the town. The town and state spent millions trying to stop the underground blaze, but all attempts were unsuccessful.

"These people were not wealthy. It was a coal town," said Mosley. "There are a number of aspects to that tragedy. One, of course, is the tragedy of the loss of community."

For an event like the Fillmore "Anomaly" to happen, the conditions have to be perfect. The location is critical, likely on a slope where a landslide would occur. Over time, cracks are created by the landslides, allowing oxygen to enter, reaching the shale and sulfides, like pyrite and marcasite, below. The oxygen reacts with the sulfides, and this oxidation causes the temperature to rise and eventually ignite organic matter into a fire.

"You may say, 'well, why doesn't it happen over here?' That's because you have to have all of these things come together," said Boles. " In some places, you get everything coming together, and it will happen. It's almost impossible to stop it."

According to Boles, you may stop it for a year or two, but it will eventually ignite. "The thing to do is to monitor it, know that this can happen."

The Ventura County Fire Department is well aware of the "Anomaly" and has taken steps to prevent future fires. "We have dozer lines all around the thermal image, so if the fire did get going, it would help keep it in this area," said Des Forges.

But authorities in Fillmore say there is no reason for the community to worry. As far as Centralia, the fire still burns today, 58 years later. The small coal community is now considered a ghost town.