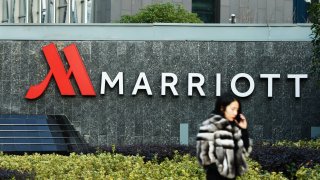 Newly unsealed depositions revealed how Marriott International was able to pull in hundreds of millions of dollars of extra revenue by adding mandatory resort fees at online checkout, after advertising lower initial prices to customers searching for hotel rooms.

The filings are part of a two-year-long court battle between Attorney General of the District of Columbia Karl Racine and Marriott, one of the world’s largest hospitality companies. Racine filed a civil suit in 2019 against Marriott, claiming the corporation deceived consumers with bait-and-switch tactics that increased advertised room rates after poorly disclosed “resort,” “destination” and “amenity” fees were added.

The hotel chain has denied deceiving consumers, pointing to the final page of its three-page checkout sequence, where customers can see the total price, including taxes and fees, that they will be charged before they finish checking out.

Customers booking on Marriott’s website  will also see a small blue disclosure about resort fees on the second page of the checkout sequence.

However, in a motion for summary judgement filed Aug. 31, the AG accused Marriott of being intentionally “ambiguous” with its final pricing online so consumers might confuse resort fees with government taxes “when it is merely a hidden part of Marriott’s price.” The AG’s latest filing also cites a 2016 internal Marriott email that found at some audited hotels, “if guests do not click the ‘total taxes and fees’ link, they will never know the amount of resort fees.”

The company disputed the AG’s claims that the disclosures were insufficient and intentionally ambiguous.

“Silly as it sounds,” Marriott attorneys wrote in their response to AG’s motion, “the District implores the Court to ignore the entire web flow process (which is just two more web pages) and find the first web page deceptive because it omits the resort fee disclosed in the two web pages it wants ignored.”

A spokesperson for the attorney general’s office told NBCLX in a statement: “Marriott is taking advantage of consumers by purposely misleading them about the price of rooms just to increase the company’s bottom line.

“Our complaint alleges bait-and-switch advertising and deceptive pricing practices, which are illegal. We’re working to hold Marriott accountable and force the company to change its practices so consumers know the price they are paying.”

Marriott declined NBCLX’s request for comment. But former Marriott executive Jeffrey Wolff said during his deposition that disclosing a property’s true rate upfront “would put us at a competitive disadvantage against hotels, other hotels, our competitors.”

In their response to AG’s motion, Marriott also pushed back against claims that the only goal of the resort fee program was to boost profits, saying it also enhanced “guest satisfaction” and the “resort experience.”

The impact on customers

An analysis by Marriott’s expert witness, submitted in February 2021, suggested only 76 percent of experienced travelers were able to properly identify the total amount they were charged when booking a room with resort fees. At least 9 percent appeared to have been unaware of the resort fees altogether.

The analysis did not account for first-time online purchasers, who would be even less likely to be aware of added hotel fees at checkout, the attorney general argued in his motion for summary judgement.

The lawsuit also alleges customers are adversely impacted when Marriott doesn’t provide transparency during the online search process because it costs them time, money and the opportunity “to find the product that they would most prefer.”

The allegations echo a 2017 analysis by a Federal Trade Commission economist that found separating the room rate from the resort fee was likely to cost consumers both time and money.

Depositions also revealed Marriott used to require hotels to “qualify as something called a ‘resort’ to charge resort fees.” But corporate emails cited in the attorney general’s complaint detailed how Marriott created the category of “destination” and “destination amenity” fees in 2014 to allow non-resorts to charge the added fees as well.

The attorney general also alleges some Marriott properties began charging extra fees for a bundle of services and products that had previously been included in the room rental, such as parking, water or use of the fitness center.

The amenities bundle often included items that the attorney general suggested had no actual value, such as use of a landline phone or fax machines. But according to depositions cited by the attorney general, Marriott instructed its employees and franchisors that “the Resort Fee is mandatory” and “should not be considered optional” when booking.

The Federal Trade Commission calls the practice of advertising only part of a product’s price upfront and then revealing additional charges at the end of the buying process “drip pricing.” A 2019 survey from Consumer Reports found hotels’ surcharges, resort fees and taxes can increase the final price by 11 to more than 100 percent.

As resort and destination fees have become a larger piece of the profit pie for Marriott and its competitors over the last 20 years, the FTC has issued several warnings about deceiving consumers. However, neither the FTC nor Congress has taken much action to combat the lodging and tourism industry, which spends millions of dollars a year lobbying Washington.

Instead of heeding the warnings, many chains have only expanded their resort fee programs, even at non-resort properties. The Consumer Report survey found that of the 34 hotel chains that’d been warned about drip pricing by the FTC, 31 still charge resort fees without including them in the initial online price shown to customers.

Noah Pransky is NBCLX’s National Political Editor. He covers Washington and state politics for NBCLX, and his investigative work has been honored with national Murrow, Polk, duPont and Cronkite awards. You can contact him confidentially at noah.pransky@nbcuni.com or on Facebook, Instagram or Twitter.