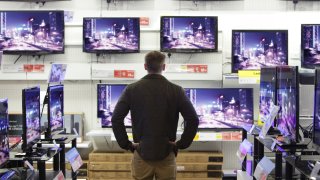 Prices of almost everything, especially gas and groceries, are rising in America. These days, it feels like everyone is freaking out about inflation — after all, an October announcement from the Labor Department revealed the 2021 inflation rate, 6.2%, is the highest in 30 years.

The pandemic has driven much of the inflation facing American shoppers, with supply-chain snags and surges in demand as lockdowns ended. But some products and services have somehow managed to dodge inflation for decades, and thanks to NBCLX, you don't have to scour the internet to find them!

Here are eight items that cost less today than they did in 2001:

The average cost of a roundtrip plane ticket in 2001 was $321, but just $260 in 2021. That’s a drop of 19% — or 46% when adjusted for inflation. And while the pandemic has impacted the cost of airfare, the price of plane tickets has steadily been dropping since 2000, according to the Bureau of Transportation Statistics.

Even though television technology improves every year, the price of a TV set has fallen dramatically over the decades. A new model could cost thousands of dollars in 2001, but today you can get a good one for several hundred. The pandemic has caused a significant price hike for televisions, but the average price when adjusted for inflation is still approximately 96% less than it was 20 years ago and 99% less than it was in 1950, according to the Bureau of Labor Statistics.

Like TVs, technology advancements have made personal computers exponentially better, as well as cheaper. State-of-the-art computers in 2001 still cost thousands of dollars ($3,499 for one of the first Apple PowerBooks, according to USA Today; $5,468 in today’s money). But the price tag on a MacBook today is closer to $1,000.

Americans are buying fewer physical books these days, despite their cost having fallen dramatically in the last decade, according to the Bureau of Labor Statistics.  However, educational books buck the trend, as their prices have risen steadily (along with the price of higher education) for generations.

While some clothing items cost more today than in 2001, filling your closet is easier to afford today than it was 20 years ago, as prices on apparel haven’t kept up with inflation, according to the Bureau of Labor Statistics. That holds true even after factoring in the supply-chain issues that have inflated clothing prices over the last year.

The cost of new toys has dropped dramatically in recent decades, roughly 70% since 2001, according to the Bureau of Labor Statistics. However, if you happen to have a mint condition Tamagotchi still laying around after all these years, it’s likely worth a lot more than it cost 20 years ago.

The cost of top-end smartphones may have climbed — along with the costs to send and store all of that data — but basic talk and text plans will set you back as little as $10 to $20 per month, significantly less than the cheapest plans you could find in 2001. In fact, the cost of landline phone service, cell phone service and even internet service have all either dropped or climbed at a slower rate than inflation since 2001, according to the Bureau of Labor Statistics.