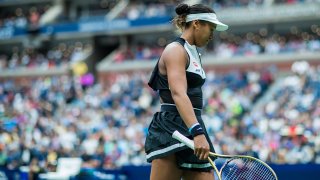 It was just last week that tennis phenom and world’s No. 2-ranked tennis player Naomi Osaka announced she would not be participating in post-match interviews because of the impact they were having on her mental health. The decision was greeted harshly by the tennis governing body, which announced Osaka would be fined $15,000 for skipping her first post-match French Open presser. Osaka was also threatened by all four Grand Slam tournaments with possible additional punishment, including disqualification or suspension, if she continued with her intention to skip post-match pressers.

That's when Osaka announced she would withdraw from the French Open and take some time off from the game.

Osaka, in a lengthy statement, said she "never wanted to be a distraction" and that her withdrawal is "the best thing for the tournament, the other players and my well-being."

"I think now the best thing for the tournament, the other players and my well-being is that I withdraw so that everyone can get back to focusing on the tennis going on in Paris," Osaka wrote. "I never wanted to be a distraction and I accept that my timing was not ideal and message could have been clearer."

Gilles Moretton, the president of the French Tennis Federation, read a brief statement to the media on Monday following Osaka's withdrawal but did not take any follow-up questions.

"First and foremost, we are sorry and sad for Naomi Osaka," Moretton said. "The outcome of Naomi withdrawing from Roland Garros is unfortunate. We wish her the best and the quickest possible recovery and we look forward to having Naomi in our tournament next year."

How a Single Mother Overcame Homelessness and Inspired a Community

Osaka's decision to focus on her mental health has been met with wide support from swath of athletes both inside and outside of tennis.

"“I feel for Naomi. Not everyone is the same. I’m thick. Other people are thin. Everyone is different and everyone handles things differently. You just have to let her handle it the way she wants to and the best way she thinks she can. That’s the only thing I can say: I think she is doing the best she can.” — Serena Williams.

“I am so sad about Naomi Osaka. I truly hope she will be ok. As athletes, we are taught to take care of our body, and perhaps the mental & emotional aspect gets short shrift. This is about more than doing or not doing a press conference. Good luck Naomi- we are all pulling for you!” — Martina Navratilova.

“You shouldn't ever have to make a decision like this-but so damn impressive taking the high road when the powers that be dont protect their own. major respect.” — Warriors guard Stephen Curry.

“It’s so sad that we are in a time that when a young person tells you they need help or a break, people respond with anger and a lack of support! I stand with you ... Your mental health is just as important as your physical health.” — Former WNBA star Lisa Leslie.

Others have lent their support as well.

While much of the reaction to Osaka has been fully supportive, tennis trailblazer Billie Jean King offered her support, while at the same time saying the press serves a vital function in the promotion of the sport.

"I fully admire and respect what Naomi is doing with her platform, so I am a little torn as I try to learn from both sides of this situation,” King began a note posted to Twitter, before bringing up the positive impact the press has had on tennis. “In our day, without the press, nobody would have known who we are or what we thought. There is no question they helped build and grow our sport to what it is today.”

“I acknowledge things are very different now with social media and everyone having an immediate ability to speak their truth,” continued King, a major figure in gender equality who formed the Women’s Tennis Association and has won 39 Grand Slam titles. “The media still play an important role in telling our story. There is no question that the media needs to respect certain boundaries. But at the end of the day it is important that we respect each other and we are in this together.”

The next Grand Slam tennis tournament is Wimbledon which begins on June 28. It's unclear if Osaka intends on competing.