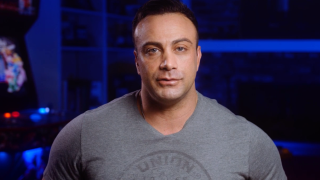 If you watched TV or movies in the '90s, you've probably seen something with Marty York. The 41-year-old's credits include "Boy Meets World," "Saved by the Bell," "Hey Arnold!" and most famously Yeah-Yeah in the beloved 1993 baseball flick "The Sandlot."

York's life has followed a similar arc to that of many child stars, describing himself as a "kind of bad kid" and eventually quitting Hollywood in 1997 after barely surviving a serious car accident. Now, York is trying to make a comeback in acting — and he's sharing his struggles openly on his way there. Here's what he told NBCLX storyteller Cody Broadway about his past and his future.

[I've] seen a lot as a child. I've seen a lot of drug use, hung out with the wrong kids, kids that stole, kids that did X-rated things in front of me. I did see a lot of things growing up that a lot of kids probably wouldn't see it, around 10 or 11 years old. It affected my mentality a little bit. It affected my outlook on the world, on right from wrong. [I] became kind of a bad kid.

Burnout as a child actor is very common because you're juggling work, you're juggling your friends, you're juggling school, you're staying up late to finish your homework, you're waking up early to go to school. You're still not at an age where you're able to handle all that stuff yet. So I think I was just completely exhausted by the time I was 17.

We've spent almost all of our life in the spotlight and being in front of the camera. And when they take that away, you look for other things that make you feel good because it's a false sense of security.

On almost dying in a car accident

This was basically at the height of my career when this happened in. ... I was at school, I had an audition I had to go to. I was driving to the audition, and I was extremely tired, nodding off. But I kept waking myself up, and I was going about 60 miles an hour, and I was driving down a two-lane road. I don't remember much else except my eyes closing, and when I opened my eyes, I woke up in an emergency room with my leg in traction basically hanging from a metal pole.

I had a shattered left femur to the point where basically the bone was put like a Tetris puzzle back into my knee. There was so much scar tissue in the back of my knee. I'll never have full flexion my knee. I can get it to about 90 degrees. I have a right, partial hip replacement. I have a broken ankle, a lot of metal on my ankle. I had to have extensive nerve damage surgery to repair the nerves in my right foot. I realized I was done once the car accident happened. I had just I lost interest in [acting] just because I was burnt out.

On breaking back into acting

Acting as a kid compared to acting as an adult is different. First of all, acting as an adult, you have to support yourself because you're not living at home with her parents anymore. So you're not only working at a job all day, but you're working at a job all day, getting off, downloading the lines ... memorizing the lines, and then you're going in and and you're doing them in front of a casting director. You're driving through traffic. Your parents aren't driving you anymore to auditions. There's just a lot more to it as an adult. That's why a lot of adults drop out. It's it's definitely tougher as an adult.

After seeing the casts of other classic movies and TV shows reuniting online, Patrick Renna decided to get his co-stars from "The Sandlot" back together for a good cause. Renna joins LX News to talk about the online charity special and what the 90s classic can teach kids today.

On the death of his sister

It it changed me. ... You just can't explain what it's like to think about your brother or sister being there one moment joking with you and then the next minute, you're putting your sister in the ground and knowing that you're never going to see her again. It took a big piece of me because she was a beautiful, smart girl, and she didn't deserve to die like that. Nadia is my little sister that passed away from a heroin overdose when she was 28 years old.

She was always proud of me for "The Sandlot." Every time she'd introduce me to people, she'd be like, "Hey, that's my brother, he's great." I still remember visiting her at the rehab center, and she'd [say], "Hey, that's my brother, the one I told you about." And people would come up and be like, "Oh, nice to meet you." And she was so proud of that. So I want to make her proud.

How many signings do I do a year? I'd probably say about 15 to 20. The character has just stuck with me for three decades. The challenge of getting in comic-cons like this is that L.A. is the hub of the entertainment industry. You've got giant stars. I've seen Arnold Schwarzenegger at things like this. I've seen Jason Momoa. ... I want to make a comeback with this.