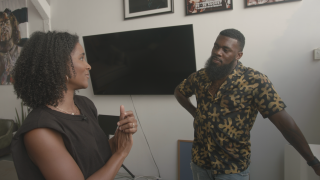 JaQuel Knight is one of Hollywood’s most in-demand choreographers, and his resume includes working with megastars like Britney Spears, Cardi B, Megan Thee Stallion and of course, Beyonce. The Southern-born artist worked with Queen Bey on multiple tours, created her iconic Super Bowl performance and is the mastermind behind her iconic “Single Ladies” dance.

Recently, though, Knight made headlines with a business move changing the dance and entertainment industry.

In 2020, Knight became the first commercial choreographer — meaning his work typically appears in music videos, TV shows, movies, etc. — to copyright his iconic dance moves, and now he’s trying to help other Black creators, especially in the social media dance world, own their work and reap the rewards.

NBCLX storyteller Ngozi Ekeledo headed to Los Angeles to interview Knight about his new business venture and how he’s changing the entertainment industry for Black creators.

The following interview has been edited and condensed for clarity.

NGOZI EKELEDO: Can you fill us in on the copyright move that you made?

JAQUEL KNIGHT: July of 2020 it was officially awarded I was the official owner – copyright owner – of "Single Ladies," the choreography I choreographed for Beyoncé back in 2008.

NGOZI: I think the question that a lot of people have is: How exactly do you copyright a move?

JAQUEL: It's very common in the concert space. It's very common in the Broadway space. Choreographers in those worlds own their work off jump. So now when we start to speak in the commercial space, when you create something, it's done in sequences. The copyright office isn't so much worrying about steps as they are looking to allow you to have ownership of a sequence.

So when it comes to a sequence, your sequence belongs to you, and once it's done and presented in a tangible form that the copyright office can say, "The public has access to this," you then have created something that is your intellectual property, belongs to you and should always belong to you.

NGOZI: Have you gotten support from the artists you've worked with?

JAQUEL: Pharrell is often like, "Brother, good job. About time." There's so many other key players in the industry that are like, "This has been needed forever. I'm happy you're speaking up for yourself."

NGOZI: Why was it an important move for you?

NGOZI: What was the experience like for you after creating the "Single Ladies" dance, which immediately blows up, and what was the aftermath in terms of being the actual creator and getting the credit?

JAQUEL: I've gone through every sense of emotion. You've created something that you can see on huge motion pictures, TV shows across the globe. People are doing it online and getting and receiving funds from the platforms, and here I am, the guy who created it, I'm seeing nothing.

For so long, I've looked up to so many awesome choreographers who've created some really epic pieces before myself, and to know that their works had been done on every single piece of platform, and they're not receiving anything, it really hurts my heart. So for me, it was: How do I start putting in the work to build a world that looks after those who love what I do?

NGOZI: Why do you think it's taken so long in the industry to do this?

JAQUEL: For some reason, as much as dance gives to people, as choreographers give to their craft, to their art, we're like the stepchild of the industry. The least paid on set, the last to get their check. I purposely don't feel like we receive the notion that we need for all the work that goes into being a dancer, being a choreographer. So I think we've just been looked over for so long.

Things have changed so much in the past 20 years, in the past 30 years, when we're looking at music and how it looks. [Before], it was so much of how it sounds, but now living in such a visual age, we're seeing a lot of it, and the choreography is a huge part of that.

It's Time We Credit Black People For Their Social Media Contributions, Periodt

TikTok Promised Black Creators It Would Do Better. Has Anything Changed?

When we start to look at choreography in the social media space, it's a great way of giving up-and-coming choreographers a chance to showcase their work [and] hear from some legends, some people they may look up to. But in that same sense, the social media space needs a bit of reform, a bit more protection for these creators. At what point do we start to do right by people who have given so much to a world of creativity and have created such a cool language that has seemed to be profitable for so many people? Why aren't those who are part of creating that not a part of the profit? That's the problem.

American society have taken from us the land, the culture, the looks, the style, the flavor, the sauce, and we very seldom receive credit. So it's nothing unusual. It's just we're fed up, and it's time for change.

NGOZI: You’ve started that process of change, too, with some funds that you've given some of these Black artists who have created works on social media. Can you share why that was important to you?

JAQUEL: Recently I have been partnering with Logitech, and through that partnership, we're identifying a total of 10 choreographers whose works we've seen and been inspired by, from Keara Wilson, who did the “Savage” dance, and the Nae Nae Twins, who did the “Savage Remix,” and a few others.

[With] all their works, we've given them their registration of the work that they have created, along with a labanotation, which is basically sheet music but for choreography, and that's just the start of what I'm looking to do.

It's important because it's something we haven't seen in this space, and unless you know that you're supported and someone has your back and [is] looking out for you, we will never know what it's like to create a world that's out here to protect us.

So for me, it’s just the starting steps of creating a system of where choreographers and creative directors can be free and know that they have protection.

NGOZI: What was the reaction from the recipients?

JAQUEL: They couldn't believe it. They're often like, "Why? Why us?" And I'm like, "Because I see me in you." It blew their minds.

NGOZI: As you've been going through your publishing company, Knight Choreography and Music Publishing Inc., and the copyright situations, are there other works that you are trying to copyright?

JAQUEL: Absolutely. I'm looking to have the home of the largest choreography work ever. Having the rights to that and being able to sell the works of these great creators to companies so they can start seeing a bit of profit, that's a dream of mine, creating a home where we all can have a piece of the pie and be a part of the conversation and feel like we're represented, and have pride, and have confidence and know that you can change the world.

We should all be screaming from the mountaintops, "Hey, that's mine. That's me," especially when people are making money. So I'm working day and night and creating a world that's protecting the works of not only myself, but the past, present and future choreographers out there.