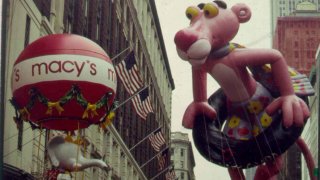 For decades, millions of American families have spent the early waking hours of Thanksgiving exactly the same way: gathering in front of the TV or braving the New York City cold to watch the Macy's Thanksgiving Day Parade.

Sure, there’s music, dancing and cool floats. But let’s be honest, we all watch for the balloons. The very big balloons. This year you can expect to see a wide-eyed baby Yoda (aka Grogu), children's book character Ada Twist and a new look for an old favorite, Ronald McDonald.

To make your parade-viewing experience extra special this Thanksgiving, here are some things you might not know about the beloved annual event.

The imaginative concept of the character balloons was brought to life in 1927 by Tony Sarg, a famous puppeteer also known as “America’s puppet master.” He shaped the way balloons are designed and handled in the iconic parade.

Like marionettes, the balloons have strings strategically attached to balance them. To control them, handlers use bars attached to the bottom of the strings similar to the ones puppeteers use at the top of a puppet.

Has the Macy's Thanksgiving Day Parade ever been canceled?

The first year the parade was canceled, a dragon balloon was still inflated as a farewell, and in another symbolic gesture, New York City’s mayor at the time, Fiorello La Guardia stabbed the balloon so its material could be contributed to the rubber shortage. He was nicknamed “dragon slayer” by the New York Times.

The parade’s return in 1945 was pivotal because it was the first year it was televised nationally. Today, over 50 million viewers tune in to watch the Macy’s Thanksgiving Day Parade on NBC.

Balloons naturally want to be round because gas expands in all directions evenly. The first balloons of the parade, such as the 1934 Mickey Mouse, relied on distinctly round elements.

But over years of crafting, designers were able to create the Mickeys we know and love today, such as 2000’s band leader Mickey or 2009’s sailor Mickey.

One especially impressive scientific feat? SpongeBob SquarePants, the parade's first square balloon in 2004. Another was Olive Oyl, the tallest balloon at 102 feet.

How to stream the Macy's Thanksgiving Day Parade on Peacock

While the parade's TV broadcast has been on NBC for decades, in 2021 it’s making its debut on NBC's streaming service. To watch the Macy's Thanksgiving Day Parade online, tune into Peacock at 9 a.m. ET. Millennials and Gen Z are ditching traditional cable, but this way you can still get in on the Thanksgiving Day Parade action! (NBCLX and Peacock have the same parent company, NBCUniversal.)