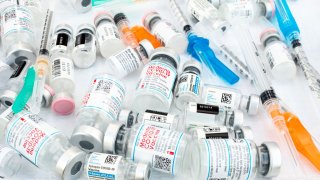 Almost 3% of U.S. adults are immunocompromised, meaning their immune system, the network of cells and proteins that protect us from bacteria, toxins and viruses, is weakened. Because this group is high risk for severe COVID and tends to have a less strong immune response from the vaccines, they face more challenges maneuvering in a pandemic world.

But recent news from drugmakers Merck and Pfizer could mean a better quality of life for these individuals is just around the corner. On Friday, Pfizer announced that its antiviral pill to treat COVID can reduce hospitalizations or deaths by up to 89% among high-risk patients based on clinical trials. A similar COVID pill from Merck was recently approved in Britain for people with at least one risk factor for developing severe illness. U.S. authorities are meeting later this month to discuss authorizing the Merck pill.

"If the initial data holds and these pills can be gotten on pharmacy shelves, they are going to have an impact on people with COVID. I hope that manufacturing can be scaled up in a way that will allow this to be distributed globally, including in low and middle income countries," explained Dr. John Mellors, chief of infectious diseases at University of Pittsburgh Medical Center.

Both pills need to be given early in the course of illness for maximum effectiveness, and they're currently only for high risk individuals. Down the road, these pills could be the new front-line treatment for immunocompromised patients infected with COVID, but it's still too early to know for sure, Dr. Raphael Pollock, director of The Ohio State University Comprehensive Cancer Center, told NBCLX.

Let's take a look at the different resources available to immunocompromised people in the pandemic and how these pills can help.

Immunocompromised people and the COVID vaccine

"The term immunocompromised encompasses all sorts of conditions," said Dr. Ghady Haidar, an infectious disease doctor at the University of Pittsburgh. "Someone with an organ transplant, someone getting chemotherapy, to someone who has an autoimmune condition, to someone with advanced HIV. There's millions and millions of millions of people in the world who live with some sort of immunocompromised system."

The vaccine works by triggering your immune system to recognize the proteins injected inside of you. But if someone's immune system doesn't work properly, there's no way of telling how the vaccine will work. That's a part of the reason immunocompromised people weren't included in the initial Pfizer, Moderna and Johnson & Johnson vaccine trials.

As a result, doctors have to rely on real-world data or subsequent trials to get a true gauge on how the vaccine works in the immunocompromised. One such study is being led by Haidar at the University of Pittsburgh Medical Center.

"It's beginning to look like for someone who's had an organ transplant, their probability of responding is much lower than other people [with] certain kinds of cancers and autoimmune conditions," Haidar said. "Now the question becomes 'What do you do for people who aren't responding by way of making antibodies?' And we don't know yet."

Monoclonal antibodies and the fourth booster

The fourth dose's goal is different: to combat waning immunity, the same purpose as a booster given to people without immune deficiencies six months after they were initially vaccinated.

But for some people, immunity just won't happen. That's why researchers are coming up with alternatives, like monoclonal antibodies. Made in a lab, these anti-COVID antibodies come from people who were already sick or mice, and they attack a specific part of the coronavirus.

They can be very effective, but so far the treatment isn’t authorized for preventative use, just after you’ve been exposed or are already sick. Plus, they are in short supply, require an IV to administer, and scientists aren’t sure how long they last.

Pfizer's COVID pill and the immunocompromised

"To date, the only viable COVID-19 outpatient treatment options we’ve had involve injection or IV infusion," Mellors said. "While these treatments are effective and our health care system has worked hard to make them as accessible as possible, the bottom line is that they must be administered by a health care professional, typically in a health care setting. With a pill, your physician can call in a prescription to your local pharmacy and you can pick it up or even have it delivered to your house."

How to help the immunocompromised during the pandemic

"The best thing a healthy person can do is to get all their shots so that they don't get infected by anything and thus don't give it to someone who is immunocompromised and might be very susceptible to it and die from it," Haidar said.

That also means you should wear your mask whenever you're in a public space and can't socially distance. It’s pretty simple: If fewer people are getting sick, it’s less likely that those who are immunocompromised will catch the virus.

Think of it as being a human shield, protecting yourself and your community.