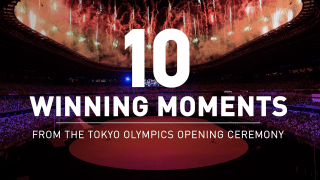 Despite the empty seats in the Olympic Stadium Friday, the Tokyo Olympics Opening Ceremony brought plenty of energy, especially by athletes excited to represent their nations on the world stage.

After a solemn moment of silence to mourn those lost in the COVID-19 pandemic, athletes flooded into the host stadium with few spectators except for world leaders.

There were artful performances, live-action Olympic sports emoji, and plenty of references to 1964, the last time Japan hosted the OIympic Games.

Representatives of more than 200 countries filed into Olympic Stadium as we heard music from iconic video games made in Japan.

To say the least, different countries brought different vibes to the event. Here are some of the highlights from nations around the world!

Some delegations were calm and reserved, some were busy on their phones capturing the moment for the 'gram, and then there was Argentina.

Argentina's throng of cheering athletes brought style and energy to the stadium despite the ceremony starting just before 8 a.m. Argentina Standard Time. Give them some credit!

This is the third-straight Olympic flagbearing appearance for Pita Taufatofua...and he's been shirtless and covered in body oil each time.

Taufatofua is a skier, canoeist and taekwondo athlete. He's scheduled to compete in the 80kg round of 16 taekwondo tournament on Tuesday.

Angola's athletes were the talk of Twitter when they entered Olympic Stadium.

Women behind Bernardo wore black dresses with gold and red stripes. Bernardo's gold skirt glittered under the lights of the venue.

She is one of only three handball athletes to be a flagbearer, according to the International Handball Federation.

We didn't set out to be huge handball stans in this piece - but we can't help that the handball flagbearers dress up nice.

We really need to read another book, but the Harry Potter reference is undeniable: there's a hint of Durmstrang vibes here.

NBC hosts Savannah Guthrie and Mike Tirico refrained from Potter references when the nation Kyrgyzstan entered the stadium - but were fans of the athletes' outfits.

The outfit included a traditional Kalpak hat and tops adorned with flowers and other designs.