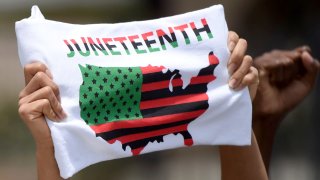 Now that Juneteenth is a national holiday, many on social media are on watch to see if it will go the way of Memorial Day, Veterans Day, and other major holidays that were intended to commemorate significant moments or people in American history.

That is to say: many are hoping they won’t start seeing Juneteenth mattress sales in the future.

This week, the government passed a bipartisan bill to make June 19th, the day memorializing when enslaved Black people in Galveston, Texas, were told they were free, a national holiday.

And social media users were quick to point out the irony of creating a 12th federal holiday that would give a country with a majority white population a day off from work.

Last year, companies en masse announced that Juneteenth would be an official holiday for all employees. This indiscriminate respite from work didn’t sit well with many then, and the same rings true now.

But what stuck out most was fears of how brands might capitalize on the newly declared holiday.

It echoed some of the same discourse heard during the summer of black squares when some of the most unlikely companies posted black squares on social media “in solidarity” with racial justice following the murder of George Floyd, to the confusion of many.

It also led some to accuse businesses of trying to profit off of the severity of anti-Black violence and making “a disingenuous attempt to exploit a movement to market” their brands, as one tweet said in reply to a post from Gushers.

So it’s no surprise that when Congress approved the Juneteenth bill, people were wary of how this might translate in a capitalistic society.