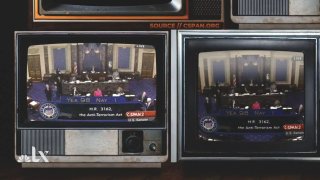 Forty-four days after the Sept. 11 attacks, during a debate on the USA PATRIOT Act, Sen. Russ Feingold delivered this warning to lawmakers:

“I recognize, fully, that this is a different world with different technologies, different issues, and different threats. Yet we must examine every item that is proposed in response to these events to be sure that we are not rewarding these terrorists and weakening ourselves, by giving up the cherished freedoms that they seek to destroy.”

Among those freedoms facing disruption – privacy. And though the Constitution doesn’t explicitly guarantee a right to privacy, it seems clear now – 20 years later – Feingold’s fears were justified.

“I felt that the American people had been attacked in a brutal and unfair and unjustified way,” Feingold said. “My job, because I was a senator, was to try to do the right thing in the Senate to try to respond to that. And that just didn't mean trying to get the bad guys. it did, but it also meant sticking to our values because otherwise the terrorists really do win.”

The PATRIOT Act expanded law enforcement’s ability to use technology to hunt down and combat terrorists. Critics say these expanded abilities extended too much authority to police.

In the Senate, the USA PATRIOT Act passed 98 to 1. The only person to vote "No" – the Democratic Senator from Wisconsin, Feingold.

“You know,” Feingold said, “even on the day when the attacks were occurring on September 11th, 2001, I was really thinking about what happens in a moment when there's a crisis, when there's enormous amount of fear.”

Fear is primitive – one of terrorism’s key ingredients. Vocabulary.com calls terrorism: "violence or the threat of violence directed against civilians for the purpose of creating intense fear which the terrorist hopes to exploit to attain political or ideological goals."

Responding to terrorism requires facing two enemies at the same time – the terrorists who commit violence, and fear, the invisible weapon that hijacks our emotions and pushes us to make impulsive decisions.

In the U.S., fear has influenced several policies aimed at providing security. On the day of the vote, Senator Feingold recalled:

“Our national consciousness still bears the stain and scars of these events: the Alien and Sedition Acts, the suspension of habeas corpus during the Civil War, the internment of Japanese Americans, German Americans, and Italian Americans during World War 2, the blacklisting of supposed communist sympathizers during the McCarthy era, the surveillance and harassment of anti-war protestors, including Dr. Martin Luther King Jr. during the Vietnam war.”

Feingold concluded: "We must not allow these pieces of our past to become prologue.”

“I think that Senator Feingold raises some very important points on the history here,” said Kurt Opsahl, deputy executive director and general counsel at the Electronic Frontier Foundation. “A lot of the debate about surveillance powers is often resting on the assumption that it will be used properly and that only good and wise people will use these powers – and history shows that’s not the case.”

The EFF says privacy is an important part of who you are.

“There's a lot of things that are very important about personal privacy,” Opsahl said. “Some might be just something you don't feel like sharing – it's no one else's business. Another might be things that could be used against you. Even if they are perfectly legal – you can see from time to time there will be a data breach where somebody's emails come out and a lot of things get taken out of context, looked at in isolation, but paint a very different picture than they may see themselves."

Today, most people place some value on their privacy – but before the 20th century, there was no legal consensus on a right to privacy.

“One thing that’s not always appreciated is the fact that the United States really gave birth to modern privacy law in the beginning of the 20th century,” said Alan Butler, executive director at the Electronic Privacy Information Center.

As film cameras and sound recorders became popular at the end of the 19th century, Brandeis and Warren argued publishers of the day were profiting from these technologies and incentivizing intrusion into the lives of innocent people by commodifying their personal communications and actions. Brandeis argued people have the right to be left alone.

In more familiar terms – the law was behind technology. Similar to today.

“I think that our laws in the United States, in particular, have not been updated meaningfully since essentially the mid-80s, somewhat in the early 90s,” said Butler. "That, I think, tells you all you need to know about whether our laws kept pace with technology.”

“At the federal level we've seen a lack of leadership where we need fundamental baseline privacy legislation that protects all Americans and we do not currently have that. So we've really fallen behind in the last 20 years, which has been a critical period, right? It's been a period of rapid, exponential technological change – and we've seen the emergence of devices and technologies and online services that fundamentally changed the game in terms of how you need to approach protecting privacy and personal data – and the law has to be updated to reflect that," Butler said.

The GDPR has inspired modern privacy legislation around the world – similar to the U.S. in the 20th century. Sixteen countries have granted new rights to their citizens to keep their private data private.

But at home, there’s still no federal law extending similar data privacy rights to Americans – so states have started making their own.

California, Colorado and Virginia have passed privacy bills that give residents more control over their data.

Massachusetts, Minnesota, New York, North Carolina, Ohio and Pennsylvania are currently discussing privacy laws. And in 15 other states, laws have been introduced, but failed to pass.

“This is almost inevitable,” said Feingold. “Technology is going to always move faster than the law.”

Sen. Feingold lost his Senate seat in 2010 — his Republican opponent weaponized that vote against the PATRIOT Act, calling him soft on terrorists.

In a normal universe, this is where the story would end. But in post-insurrection America, we like a little irony with our politics.

The USA PATRIOT Act – created by a Republican White House in 2001 – was finally canceled by a Republican president. In 2020 after the GOP agreed to renew – President Trump threatened to veto – so Republicans changed their mind and allowed it to expire.

The EFF and EPIC describe the last 20 years as a pendulum swing between two states. First, toward a police state, then back toward a democratic one.

Back in that 2001 Senate speech, Russ Feingold explained the difference:

“That country would not be America.”

“I treasure whatever privacy I have,” said Feingold. “But, you know, if things can pick up everything you say and everything you do, we have to fight for it. But frankly, I don't have the technical abilities and capacities to understand all of this and I'm going to leave it to your generation and other generations to figure it out. But please don't give up on personal privacy. It is a very important part of life.”