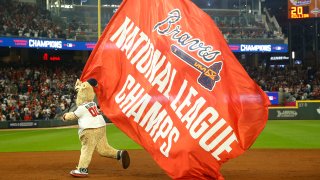 With the Atlanta Braves preparing to host World Series 2021 games this week against the Houston Astros, politicians and pundits are once again taking jabs at Major League Baseball's decision to relocate the 2021 All-Star Game from Georgia to Colorado following the state's passage of controversial voting reforms.

Why did the MLB move the All-Star Game in the first place?

Back in April, the MLB announced it was pulling the game from Atlanta's Truist Park in protest of Georgia's new voting law, which, among other restrictions, limits access to ballot drop boxes and the windows for voters to request mail ballots.

"I have decided that the best way to demonstrate our values as a sport is by relocating this year's All-Star Game and MLB Draft," Commissioner Robert D. Manfred Jr. said in a statement at the time. "Major League Baseball fundamentally supports voting rights for all Americans and opposes restrictions to the ballot box."

Georgia Democrats and Republicans alike criticized the decision. Over the summer, Georgia Secretary of State Brad Raffensperger told NBCLX that the relocation "really [hurt] small business America and small business Georgians.” So, when it was revealed the 2021 World Series would be heading back to the state, plenty of prominent figures had something to say about it.

"While Stacey Abrams and the MLB stole the All-Star Game from hardworking Georgians, the Braves earned their trip to the World Series this season and are bringing it home to Georgia," tweeted Georgia Gov. Brian Kemp late Sunday. "Chop On, and Go @Braves!"

The state's agricultural commissioner, Gary Black, also tweeted about Abrams, asking if Georgia's Democratic candidate for governor in 2018 would try to have the game moved once again.

The only problem with the claims is that Abrams didn’t advocate for the All-Star relocation. Not to mention, the other argument fueling much of the backlash to the relocation — that the boycott cost Georgia businesses $100 million in revenue — has been thoroughly debunked by economists.

The biggest financial loser after the move may've been the Atlanta Braves themselves. The team controls not just the activities at Truist Park but also the entire development surrounding the stadium, which was expecting millions of dollars of pre- and post-game business during All-Star week.

But much of what the Braves take home in profit was going to Colorado anyway. The team is owned by Liberty Media Corporation, a company headquartered just outside of Denver.

Though the economic impact claim was suspect, it was featured in a new attack ad from Senate Republicans against freshman Georgia Sen. Raphael Warnock. The ad blamed the "radical left woke crowd" for "forcing the MLB to boycott Georgia."

Economists have called the claims of $100 million in economic impact losses far-fetched. The number is likely closer to a few million, but the relocation of the All-Star Game was certainly felt by the businesses in the immediate proximity to Truist Park.

It’s just that The Battery – designed to be a one-stop-shop for fans on a game-day, from parking to restaurants to shops to bars – has limited the impact of game-day crowds on businesses just outside the development, according to business owners in Cobb County. Several told NBCLX they never got the ballpark boost they were initially promised.

The Braves have been part of a growing trend in pro sports where teams seek not just new stadiums to increase revenue, but also entire multi-use developments to diversify revenue streams.

And even though baseball’s Midsummer Classic is arguably the league’s marquee special event, many of the tickets for the event go to Braves season ticket-holders, which further limited the potential economic boost from hosting an international showcase.

“[The All-Star Game] is actually quite a small event,” Kennesaw State University economist J.C. Bradbury told NBCLX over the summer. “These are people who are normally spending their money here anyway. And even people who are coming from out of town might be displacing people who [would otherwise] be doing things around the stadium.”

Bradbury previously conducted a study on the economic impact of the Braves’ now four-year-old Cobb County stadium, which found only a small and “not statistically significant” increase in taxable sales since the team moved from Atlanta in 2017. He concluded a third of the new net spending was “crowding out other local economic activity.”

Neither the Braves nor Liberty Media Corporation responded to requests for interviews over the summer, but the team issued one public statement in April following the league’s relocation announcement.

“This was neither our decision, nor our recommendation,” the Braves wrote. “The Braves organization will continue to stress the importance of equal voting opportunities and we had hoped our city could use this event as a platform to enhance the discussion. ... Unfortunately, businesses, employees, and fans in Georgia are the victims of this decision.”

Noah Pransky is NBCLX’s National Political Editor. He covers Washington and state politics for NBCLX, and his investigative work has been honored with national Murrow, Polk, duPont and Cronkite awards. You can contact him confidentially at noah.pransky@nbcuni.com or on Facebook, Instagram, or Twitter.