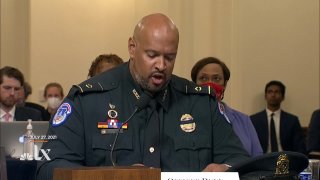 An all-day hearing about the Jan. 6 Capitol riot has shown that the day was even uglier than we imagined or saw on social media that day.

Police officers described the scene in harrowing detail - some were beaten unconscious and feared death. Capitol Police Officer Harry Dunn recounted the racial epithets members of the crowd hurled his way while defending the Capitol Rotunda.

Dunn said he told a crowd to leave the building but they continued flooding the Speaker's Lobby - a corridor outside the House chamber.

The crowd responded by saying "President Trump invited us here!" "We're here to stop the steal!" and that "nobody voted for Joe Biden."

Dunn said he keeps politics out of his job as a law enforcement officer, but in this case he responded "Well, I voted for Joe Biden. Does my vote not count? Am I nobody?"

Dunn said that response led to "a torrent of racial epithets" from the crowd of about 20 people. Multiple people in the crowd called him the N-word.

"No one had ever, ever called me a [N-word] while wearing the uniform of a Capitol Police officer," Dunn said. He heard from another officer who was 40 years old and had never heard the word said to his face.

"And that streak ended on January 6," Dunn said of the fellow officer.