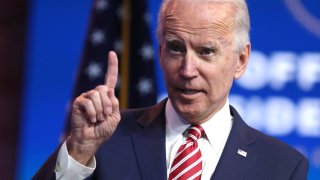 A plurality of American voters want President-elect Joe Biden to make unity his top priority upon assuming the presidency in January, ahead of other legislative priorities the Democratic campaigned on.

Forty-one percent of registered voters surveyed in a new NBCLX/YouGov poll said Biden should prioritize uniting the nation over a progressive agenda, including 35% of Democrat-leaning voters, 45% of independents and 50% of Republican-leaning voters.  Only 29% of registered voters – predominantly Democrats – responded that Biden should prioritize the progressive policies he campaigned on.

With 90% of respondents indicating the nation is divided at the moment, the president-elect faces a difficult challenge of satisfying both his progressive base and his conservative critics.  He will also face questions regarding a series of investigations into President Trump’s financial dealings – from ongoing state investigations into alleged business, insurance and tax fraud, to yet-to-be-resolved questions about federal crimes the president may have committed while in office.

However, a plurality of voters (37% overall) – including 40% of independent voters – said they preferred Biden provide no direction at all to prosecutors.

Respondents were asked if they would support a presidential pardon for Trump, if he is found to have committed crimes while serving as president.  Only 34% of registered voters – predominantly Republicans - indicated support for a pardon, while 52% of respondents – including 84% of Democrats and 47% of independents – said they opposed a Trump pardon.

Only one other president in history – Richard Nixon – has received a pardon, but his successor, Gerald Ford, explained his decision to issue the pardon as a way for the nation to move past an extremely divisive political period.

There are also questions over whether President Trump could pardon himself, but 72% of all poll respondents – including 49% of Republican-leaning voters – did not believe sitting presidents should be able to pardon themselves from federal crimes.  Only 13% of all respondents said a sitting president should be able to pardon himself/herself, including 26% of Republican-leaners, 14% of independents and 3% of Democratic-leaning voters.