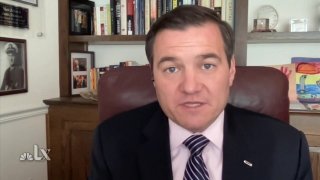 Matt Zeller is lucky to be alive.

Facing down against Taliban fighters while serving in the U.S. Army in Afghanistan, Zeller could have died - if not for an interpreter alongside him in battle saving his life.

Now as the U.S. pulls out of Afghanistan after two decades and the Taliban takes over much of the country, Zeller is hardly sleeping.

He's been checking in military family and commiserating with other veterans. And with the organization he co-founded, No One Left Behind, he has been loudly calling for the U.S. to save as many people as possible on the way out of the country.

"People like me looked these people in the eye and said, quite simply put, 'your time of need comes, we're going to be there for you,'" Zeller said. "For me it was simple. The morning after my interpreter saved my life, I sat him down and said, 'I owe you a life debt. If you need anything, including commandeering an aircraft to come pick you up, I'm going to do it.'

"And I meant it. And it took heaven and Earth and four years of advocacy just to get him his visa, and that was for one person."

He worries that the withdrawal will hurt trust in the U.S. military in future operations.

"If we don't save these people, the cost to us is going to be unthinkable. More unthinkable than the cost that we're already having to experience right now. No one is ever going to trust us again."

As the U.S. withdraws from Afghanistan, translators could be in danger, says Matt Zeller of No One Left Behind. Zeller says he is only alive today because an interpreter saved his life in combat. Now he's speaking up for other interpreters and urging President Biden and Congress to act swiftly to bring Afghan interpreters to Guam, where they can be safe from the Taliban.

"We're the 800-pound gorilla in the room. Let's start throwing our weight around and actually saving some people for a change... They haven't killed all these people yet. We can still save them. We can do it at the barrel end of a gun, but that's what it's come to."

Zeller recently received a letter that's going to stick with him for the rest of his life.

"We really appreciate your hard working for evacuating Afghan interpreters and translators," the letter began. "Here in Mazar-e-Sharif, we will be killed soon. We all know this. It is to be mentioned that we do not regret for what we have done and with whom we have worked."

"People are facing their literal death sentences and as they're being walked to the gallows they still have the human decency to thank us for trying. Why aren't we saving these people?"

It's clear that many people want to leave - chaotic scenes in videos from the Hamid Karzai International Airport in the capital city of Kabul went viral over the weekend.

In Zeller's mind, the history books will remember the beginning and end of the U.S.-Afghanistan story with two similar images - of people falling to their deaths.

"It began with the image of a man jumping out of the World Trade Center because the fate that he was experiencing was at that point so much worse that it was better to just jump to his death...it's now going to end with Afghans who are clinging to a C17, desperate to get away from the Taliban. So desperate that they were willing to hold onto the side of the aircraft while it took off and then as they were holding to the wheels, they fell off."