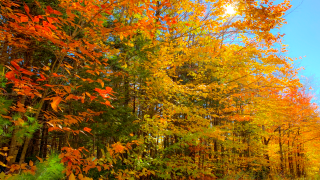 As if extreme weather, a housing crisis and long gas station lines weren't bad enough, climate change has started chipping away at one of the simple pleasures of this time of year: fall foliage.

Why do leaves change color in the fall?

Leaves change color in the fall because less daylight and cooler temperatures prompt them to stop producing chlorophyl, the pigment in the leaves that give them their green color, explained Colleen Matula, a forest ecologist at the Wisconsin Department of Natural Resources. When the chlorophyl breaks down, the yellows, oranges and reds become visible.

Edge of the Abyss: Why Climate Migration May Lead to the Next Great Housing Crisis

"Carbon dioxide is going up because we keep burning fossil fuels, and that releases carbon dioxide into the atmosphere, and it's that carbon dioxide plus methane that is causing the warming," explained Howie Neufeld, a plant physiologist and biology Professor at Appalachian State University. "In studies where plants have been exposed to high CO2 compared to lower CO2, the plants tend to hold on to their leaves longer into the fall."

As a result, many places are missing that big explosion of color that happens within several days. Instead, some trees turn early in the season, others turn in the middle and others are much later, diluting the visual experience, Neufeld said.

"Climate change is affecting virtually all aspects of trees and their interactions with the environment, and fall foliage is no exception," Dan Herms, a climate scientist who's been studying climate change's effect on trees, added. He's also observed that lingering warm temperatures in the fall has led leaves, on average, to change later in the season than they did decades ago.

Other threats to trees that can be tied to climate change, like droughts, hurricanes and more invasive pests, can also impact fall foliage.

"This year we're going through a severe drought, and I've been noticing with fall color that it's just not happening," Matula said. "With the lack of moisture in those areas, all color has been either put off, or the trees are just not turning color, and the leaves are just falling off. We're claiming that we're past peak right now, but really we haven't seen the fall color that we've are used to."

She added that "exotic pests are just taking off. They're expanding their range, they're impacting trees by either killing them and eating the leaves, just impacting their whole life cycle." Fungal diseases, too, can make leaves turn brown instead.

"We do see these forest health issues that are signaling to us that there's something is going on here," Matula said.

You may think that skipping the beautiful hues that much of the country is used to is just about aesthetics, but it can have a financial impact on communities. In much of the country, fall is the biggest tourism season because of the leaves, according to Neufeld.

"A lot of these small companies and businesses may make their profit at this time of year, so it's important that people get out and see the colors," he said.

Without fall foliage, he also worries fewer people will be inspired to appreciate the great outdoors.

"The more we get people out in nature and the more they see how sensitive it is to what people can do to it, they might have more value for it," he said. "They may put more emphasis on trying to conserve nature, and that may make them think more about what climate change is doing and maybe figure out ways to stop it."