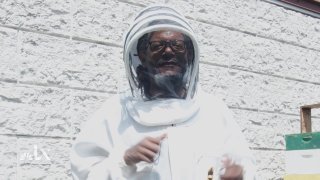 Extremely Online Young People are perhaps the most keenly aware of bees' crucial role in our environment - and the dangers they face. "Bees are dying at an alarming rate" was a huge meme. Tumblr People became obsessed with spamming the entire script of Jerry Seinfeld's magnum opus, Bee Movie, into group chats - or wearing a shirt with the script on it.

But maybe it's time to put the phones down, get outside and help your local ecosystem. You can make a career out of that, or just do something nice for the world if you aren't looking to grind on a new side hustle.

NBCLX reached out to Chicago beekeeper Thad Smith for some tips on how a young person can get into the profession and how they can help.

And watch above for a great story of how Smith's company Westside Bee Boyz is organizing STEAM and trade-based learning projects to engage and inspire the community.

Get hired or get learning

If you want to get into beekeeping as a business, "you can make some serious cheddar, $23 an hour in the summertime," said Smith. "You know, working outside, having your own hours. Doing whatever the [heck] you want to do."

In Chicago, plenty of local beekeepers - including Smith - offer apprenticeships where you can learn the trade.

"Once you get into beekeeping, you will sit in front of your hive for what seems like hours and just watch them work and do their thing. Very, very therapeutic. Very therapeutic."

Bee safe. TikTok may not be the best place for info.

Smith was well aware of a recent TikTok beef between two beekeepers - where one user went viral after criticizing another, saying she set a dangerous precedent and making the profession seem less dangerous than reality.

"I call that the Tarzan syndrome, dude," Smith said. "It's like, white people think that they can come into the native land and just do native stuff."

"There is not one real beekeeper that would do what she did, not one," added Smith. "Not one. It's insane."

Smith believes those videos are staged or fake - claims similar to those made by the account @LAHoneybeeRescue.

Smith pointed out one video where Thompson resettles a colony of bees that was living under some floorboards. She even grabs the queen with a clip and places it in a freestanding new hive.

"She cracked open a floor and started digging into a hole? ... Now you're talking about this like, dude, you broke into my house. Not one bee stung her defending their home at all? No," Smith said. "They are going to be very defensive if somebody wants to come in and move then or mess with the queen, come on. That's why it's fake."

Smith would feel comfortable without equipment if he were shaking some bees off a branch. But when bees have built a comb and established a burrow center, "that's a whole different story" that you should only handle with protective gear, he says.

"Definitely protective gear. Working with a swarm, you've got to be a bee whisperer to do some crap like that."

In later videos responding to the online controversy, Thompson addressed critics and what she called "a series of untrue and hurtful attacks" about her and her work. Her company's website says it "supports the health and wellness of honeybees."

Learn about your native bees

While Westside Bee Boyz does sell honey products, Smith likes to stress the importance of native bees - the bees that know an area the best and help pollinate the local plants.

"Honeybees are not from this continent. They're colonizers, is what they are...colonizers tend to take over things that the native population has already built up to serve everybody," Smith said. "But colonizers only want it to serve one purpose, themselves."

Introducing honeybees to an area can crowd out native bees within a half-mile radius of the honeybee hive, said Smith. "And now in that area, only certain plants are going to dominate that area because [honey]bees only like certain plants."

Our global food supply is being threatened by a decline in bee populations, with the pollinators facing several dangers.

"I love bees, I love honeybees, I love what they've done for my life," Smith added. "However, there are 25,000 species of bees on this planet that we don't talk about on this planet. Why is that? I want you to reach in your wallet and open it up...that's the only reason why."

Smith pointed out that native bees are crucial to our food supply and the economy in other ways - as just one example, Illinois is a huge exporter of pumpkins, which would not grow without pollination help from the native squash bee.

Not ready for bees? Take care of plants

If you have a backyard, there are probably native bees in it right now.

"I tell people if you want to be a beekeeper, start a garden. First thing I'd tell you to do, the easiest way," says Smith. "Plant a plant, that's how you become a beekeeper. ... That's something everybody can do."

"Get with your local school and start an agricultural thing. Or go to your park and throw some seed bombs, start planting some stuff surreptitiously. It's a fun activity you can do with your kids."

Or you could help butterflies by planting some milkweed for them. Think about biodiversity and building an ecosystem that can work in harmony.

"Start with the worms and the flies and you start with bees and the birds, and the raccoons. Now you're building an ecosystem, and that is a marvelous thing to behold in your backyard."