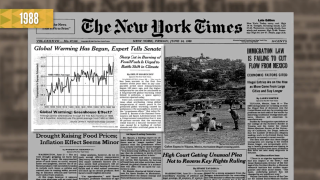 Since the 1800s, humans have had plenty of warnings about the dangers of climate change for the future of the planet and life as we know it. One of the first instances of a scientist sounding the alarm came in the 1850s, during the American Industrial Revolution, from a woman named Eunice Newton Foote. And let's just say her research foreshadowed how both climate change and discerning women would be treated by society for decades to come.

Foote wasn't allowed to present her own work at the annual meeting of the American Association for the Advancement of Science in 1856. Nope, the highly regarded Joseph Henry, first secretary of the Smithsonian Institution, did that. And while her research was published twice, it got only a page and a half in the American Journal of Science and Arts in November 1856 and a short summary in the Annual of Scientific Discovery the following year, according to Climate.gov.

Her experiments are now considered a precursor to those done in 1859 by John Tyndall, who proved the greenhouse effect comes from gases like water vapor and carbon dioxide absorbing heat radiated from the surface of the Earth (not the sun's rays) and redirecting it back toward Earth. But Tyndall cited a fellow male scientist in his research, not Foote.

"Despite her remarkable insight into the influence that higher carbon dioxide levels in the past would have had on Earth’s temperature, Foote went unnoticed in the history of climate science until recently," Climate.gov explained in 2019 to celebrate her 200th birthday.

So what exactly was Foote's experiment? And why did she do it?

During the industrial revolution in the U.S., factories and railroads were popping up, and more coal was being used to power steam engines, so Foote got concerned about the amount of carbon dioxide entering the atmosphere, NBCLX Storyteller Chase Cain reported. She decided to take a few glass tubes and put a thermometer along with different types of gas in each. She held them up to the sun and found the one with moist air got hotter than the one with dry air, and the one with carbon dioxide got hotter more quickly than the rest.

In the first part of NBCLX Storyteller Chase Cain's climate change survival guide, he explains the basics of why the planet is warming and what needs to change to protect its future. Scientists agree that the safe limit of warming is only 2.7 degrees Fahrenheit, and we've already hit 2.2 degrees. What's more, we're headed toward warming of 5 degrees, and the results could be "apocalyptic," Cain says.

"An atmosphere of that gas [carbon dioxide] would give our Earth a high temperature," she wrote.

Of course, she was right. Over the past 140 years, the average temperature of the Earth has increased by 2.2 degrees Fahrenheit. It might not sound like much, but the amount of heating that climate scientists agree is manageable is 2.7 degrees. So yes, we're getting pretty close, despite Foote's best efforts — and others'.

"That will be staying with us for centuries to come because there’s no good way to reverse this," Sean Sublette, meteorologist with Climate Central, told Chase. "[There's] no good way to cool the planet easily."

Warnings from those who came after Foote include a Ford physicist who wrote a piece for Time magazine in 1953, a co-inventor of the atomic bomb in 1959, President Lyndon Johnson's scientists in 1965 and a NASA scientist, who told Congress in 1988 it was 99% certain climate change was caused by humans.

Still, Foote was one of the first and most important climate scientists to speak out. If only we had listened.