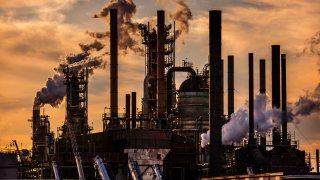 These days, we talk about climate change as an existential threat to a large portion of the world’s population. Pew Research polls show increasing support for prioritizing climate change policies. Climate change is expected to be a major topic in upcoming negotiations among world leaders.

There’s lots of news coverage about the looming threat of hitting 2℃ of global warming and the environmental consequences we’re now experiencing at unprecedented levels.

But the problem of human-caused climate change is not new — nor is the idea that it can be caused by the burning of fossil fuels. The problem was studied for decades, including by scientists funded by the oil and gas industry, who acknowledged the problem— in writing.

So when did the industry know, and what did they do about it?

Documents suggest not only did those companies not intervene but they chose to keep their information from consumers, even though they knew their products were contributing to a climate crisis.

“These activities are already hurting people right here, right now, making hurricanes worse, making droughts worse, causing crop failures, killing people in heat waves and floods,” says Harvard professor and science historian Dr. Naomi Oreskes. “This is the reality of what their product has done. And instead of acknowledging that reality and working towards fixing it, they want to distract attention.”

In the video above, NBCLX producer Janine Doyon dives into documents that point to what the industry knew about climate change and when executives knew it. There are several documents dating back decades showing research and data that was alarming. But thanks to companies’ public relations work, the alarms set off by their research hardly sounded in public discourse.

“They are acknowledging that climate change is a serious threat, but in public, they’re presenting a very different picture,” said Oreskes. “The public picture is, ‘Oh we don’t know, it’s too soon to tell, and it would be rash and premature to have any kind of policy action.’

NBCLX reached out to the American Petroleum Institute, a trade association which represents gas and oil companies and which has produced decades of climate research for the fossil fuel industry. They declined our offer to speak but sent a written statement, saying, “The record of the past two decades demonstrates that the industry has achieved its goal of providing affordable, reliable American energy to U.S. consumers while substantially reducing emissions and our environmental footprint. Any suggestion to the contrary is false.”

NBCLX also reached out to the Western States Petroleum Association, another trade group that started a fossil fuel research and PR group called the Smoke and Fumes Committee in the 1940s. A representative for WSPA declined to speak on camera about whether their organization misled the public on the harm their products were causing on the environment, saying, “There is nothing insightful I can offer about a policy committee from 75 years ago.”

Edge of the Abyss: Why Climate Migration May Lead to the Next Great Housing Crisis

While organizations like API and WSPA have begun to prioritize emissions reductions and cleaner energy in recent years, internal documents and research paid for by the fossil fuel industry dating back to the 1950s show a much more complicated track record with addressing the impact their products were having on the environment.

Here are a few of the documents to see for yourself.

Oil and gas companies were aware water and air pollution were an issue as far back as the 1920s.

In a 1954 paper, an official for an industry group wrote that pollution prevention plans started because of “the recognition, some thirty years ago...that water and air pollution would become a very serious problem in certain portions of the nation unless well-planned actions were taken to prevent it.”

The author, Vance Jenkins, served as an executive secretary for the Smoke and Fumes Committee after it moved from WSPA and was reformed under the American Petroleum Institute.

Later in the same paper, he argued against emissions laws, saying: “passing a law is, in many cases, the wrong way to start about solving an air pollution problem. And passing the wrong law can also be the most expensive and irritating way to approach the problem as far as both the public and industry are concerned.”

Back then, many researchers believed the planet’s oceans would absorb excess carbon dioxide, preventing it from getting into the atmosphere.

In a paper published in 1957, Scripps Institute scientists Roger Revelle and Hans Suess poked holes in that commonly-held belief.

They acknowledged that the oceans probably captured most of the world’s carbon emissions since the beginning of the industrial revolution. But the paper also said at some point, the ocean would not be able to keep up if emissions levels kept increasing.

The amount of carbon dioxide in the atmosphere “may become significant during future decades if industrial fuel combustion continues to rise exponentially,” they wrote.

Two months later, Humble Oil-funded scientists released a paper that showed some more faith in the ocean as a solution to the carbon problem. They projected that carbon would stay in the oceans for longer than Revelle and Suess believed, delaying the impact on the atmosphere. Humble Oil later became Exxon in a merger with Standard Oil in 1973.

Three years after warning that the rise in carbon dioxide was “significant,” scientist Roger Revelle and associates wrote a report for President Lyndon B. Johnson’s Science Advisory Committee linking the burning of fossil fuels as the primary driver in emissions increases.

“Through his worldwide industrial civilization, Man is unwittingly conducting a vast geophysical experiment. Within a few generations he is burning the fossil fuels that slowly accumulated in the earth over the past 500 million years.”

Revelle’s report warns U.S. leadership that sustained CO2 emissions would have significant environmental consequences, including the melting of the ice caps, warming of the oceans, a rise in sea level, and more acidic freshwater.

“The climatic changes that may be produced by the increased CO2 content could be deleterious from the point of view of human beings.”

Less than a year later, a coordinator for Humble Oil Company wrote to a trade journal about the personal responsibility consumers had to understand the science of the products they consume, and encouraged they work in tandem with industry and government representatives to achieve clean air goals.

“A great deal of emotion surrounds the matter of air conservation today… it’s not surprising that the public is confused, frustrated and fearful.”

The same work laments the framing of the fossil fuel industry as the antagonists in the climate change narrative.

“Many participants in today’s efforts to converse the quality of community air resources lapse into use of a fairly stylized set of platitudes as they seek a villain to blame for the problem.”

This report funded by the American Petroleum Institute said that if carbon dioxide levels kept increasing in the atmosphere, “it is likely that noticeable increases in temperature could occur. Changes in temperature on a worldwide scale could cause major changes in the Earth’s environment over the next several hundred years including change in the polar ice caps.”

Concerns were also raised about a rise in sea levels and the warming of the oceans.

“We are unsure as to what our long-lived pollutants are doing to the environment; however, there seems to be no doubt that the potential damage to our environment could be severe.”

In a document outlining the company’s position on the enhanced greenhouse effect, Exxon told PR reps to “emphasize the uncertainty in scientific conclusions.”

The document acknowledges “the principal greenhouse gases are by-products of fossil fuel combustion.” But, climate models that projected an increase in global temperature were called “not very reliable.”

NBCLX reached out to ExxonMobil and they declined to speak with us for this project, instead sending a copy of their 2021 energy and carbon summary, saying “ExxonMobil will play an important role in meeting society’s need for energy and at the same time is committed to supporting efforts to mitigate the risk of climate change.”