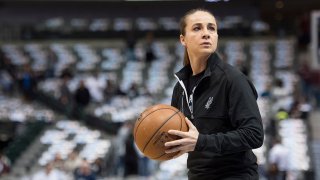 It's 2021 and there are thankfully fewer and fewer glass ceilings of note to break in professional sports every day. But... there's still one significant one that could be smashed to pieces in the coming weeks... the hiring of the first female head coach in NBA history.

There's much speculation that the Boston Celtics could be set to hire the first female coach. The buzz has centered on two names in particular, San Antonio Spurs Assistant Coach Becky Hammon and Kara Lawson, head coach of the Duke University women's basketball team.

As for Lawson, her basketball resume speaks for itself. Lawson won a WNBA title in 2005 and gold at the 2008 Summer Olympics in Beijing. She also has a direct history with the Celtics having served as an assistant coach during the 2019 season before being hired in 2020 as the head coach at Duke.

For more on Hammon, Lawson and the Boston Celtics head coaching search, read the full story on NBC Sports Boston.