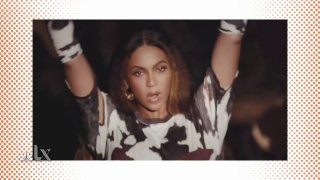 The beyhive is buzzing.

Icy Park, the third installment of Beyoncé's Ivy Park x Adidas collaboration, is set to drop this afternoon. The multi-platinum artist teased the new line over the last month via her social media posts, which featured celebrities like Hailey Bieber, Gucci Mane and Kaash Paige.

Beyoncé introduced her activewear line in 2016 in collaboration with Topshop’s Sir Philip Green. The line launched with 200 styles at 12 retailers — including Topshop, Net-a-porter and Selfridges — and in 50 countries. According to WWD, following a series of sexual harassment allegations against Green, Beyoncé bought back the Topshop shares, giving her control of 100 percent of the brand. In April, the singer teamed with Adidas for an Ivy Park relaunch with footwear and clothing. Beyoncé still retains ownership of the line.

While Beyonce may be the brightest music star tearing up the fashion world, she's hardly the first. Here's a look at 5 other music icons claiming a stake in the fashion industry.

Rihanna first debuted her size-inclusive Fenty lingerie line in 2018. Just this week Forbes reported that the "Pour It Up" singer's Savage X Fenty lingerie brand is now worth a cool $1 billion after the company recorded revenue growth of more than 200% last year.

West has been taking it Yeezy since launching his cult-favorite collaboration with Adidas in 2015 to much fanfare.

Today, the Yeezy shoe line is considered one of the most influential sneaker brands in the world. Bank of America Corp. valued the sneaker side alone of his business empire at as much as $3 billion last year, according to a document reviewed by Bloomberg.

As if being an award-winning actress and singer weren't enough, Lopez burst into the fashion world in 2010 through a licensing deal with Li & Fung’s U.S. division and launched a line of clothing made in collaboration with then-husband Marc Anthony at Kohl’s. Following the pair's divorce in 2014, the line was separated into two brands. Lopez’s line includes contemporary fashion, accessories and footwear and is still sold at Kohl’s according to WWD.

Jessica Simpson may not be making much music anymore, but she's making major dollars. The singer left her music career behind for one in fashion in 2006 when she signed a licensing deal with JS Brand Management for a namesake fashion label. In just 10 years, Simpson’s label crossed the $1 billion mark and now includes 22 licenses for 31 product categories, including fragrance, footwear and activewear, among others.