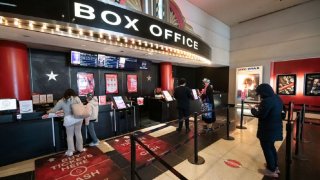 If you own a movie theater, "Spider Man: No Way Home" was the holiday gift you were waiting for. As omicron spiked across the U.S., it still managed to net more than $1 billion worldwide, a major victory for any film but especially after a two-year slump. While not every holiday film was a hit this year, "Sing 2," "The 355" and "Kingsman 3" are performing well enough that some experts say theaters could be coming back in style.

”I think movies are back for hard-core movie fans. I don’t think movie theaters are back for the average consumer,” said Kent Garrison, co-host of the "Mad About Movies" podcast. “For example, going on a date or just looking for something to see on the weekend, that crowd has tended to not show up since the pandemic.”

Movie goers appear to be pretty evenly split on their interest in going (back) to the theater, according to a new set of data released by film research firm The Quorum. Avid film buffs are ready for the big screen while the other half of respondents said. they had “take it or leave it” feelings about returning to the cinema.

The tally for the 2021 holiday box office shows a big win in "Spider Man: No Way Home" and an underperformer in "The Matrix Resurrections."

Movies in theaters are back after a long pause during the coronavirus pandemic - and Marvel's Spider-Man: No Way Home feels like visiting some old friends, according to Juju Green. The man also known as @straw_hat_goofy on TikTok has already seen the film twice, including its premiere, and felt it upstaged the early 2000s Spider-Man movies directed by Sam Raimi. "It is my favorite MCU film," he says.

The concern for the big theater companies is that people no longer have to make the trip to see an anticipated release. Via streaming apps like Disney+, HBO Max and Peacock (owned by our parent company, NBCUniversal) audiences got used to watching the newest release from home. Sure, you make your own popcorn but that's a small sacrifice against luxuries like pausing the movie to use the restroom.

”There is still a huge market out there of adults and older people and younger people and families who love that theatrical experience," Garrison said. "Once you see the profit margin dwindle for the studio and they say, 'OK, we can make more money if we just go direct to consumer,' that's when the real breaking point is going to be. But right now, there’s still so much money to be made in the theater that it’s still kind of worth it for everybody involved to do that.”

“We have to cut the theater some slack,” Herrin said. “They've got to try to serve two different masters. On one hand, you've got audiences who are very price sensitive and feel that going to the movies is very expensive and in particular, the concessions. ... The flip side of that is people who want a real premium experience, higher-end concessions and ... better seats and don't want to see commercials in front of the movie.”

This year, there were fewer holiday-themed releases, and it’s intentional. Studios and theaters prioritized big titles with a long shelf life. They’ll know if it worked sometime in February, when they can tally the results of the holiday box office.

”I've always been a proponent that if I can pay more to stay at home, I will do that,” Garrison said. “But there's always going to be a nostalgic place for movie theaters in people's minds. ... How big of a business? I don't know, but we might compare it to the video rental industry."

"When it was starting to dwindle out, there was there was still a market for it, but it was smaller, and now that they're gone, people want video rental stores again and VHS is becoming a huge thing. I think it'll be the same with movie theaters. You'll see a lot of independent theaters pop up, drive-in movie theaters. Those nostalgic experiences are going to start becoming a lot more popular."