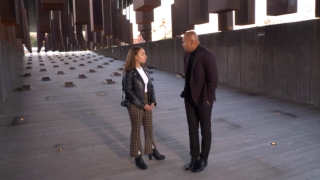 From dramatic fare to modern day horrors, Black History Month provides a good occasion to either reacquaint yourself with some of these treasures of Black cinema or discover them for the first time. And most you'll be able to find on Netflix, Amazon Prime or some other streaming video service.

How This Filmmaker Created a Drive-In Theater for Black Cinema

Starring Sidney Poitier, Spencer Tracy and Katharine Hepburn, "Guess Who's Coming to Dinner" made major waves upon release as it was one of the first major motion pictures to depict an interracial marriage in a positive light. It came out the same year that the Supreme Court ruled on Loving v. Virginia, which struck down all state laws banning interracial marriage.

It's the all-Black "Wizard of Oz." Starring Diana Ross, Michael Jackson, Lena Horne, and Richard Pryor, the film follows the adventures of Dorothy, a shy, 24-year-old Harlem schoolteacher who finds herself magically transported to the urban fantasy Land of Oz.

The biographical sports film stars Denzel Washington and is based on the true story of Black coach Herman Boone and his attempt to integrate the T. C. Williams High School football team in Alexandria, Virginia, in 1971.

Set in the 1920s New Orleans, the animated Disney film tells the story of a waitress named Tiana who dreams of opening her own restaurant. After kissing a prince who has been turned into a frog by an evil witch doctor, Tiana becomes a frog herself and must find a way to turn back into a human before it is too late. More significantly, the film debuted Tiana as the first Black Disney Princess.

Starring Michael B. Jordan, the biographical drama was written and directed by Ryan Coogler. It's based on the events leading to the death of Oscar Grant, a young Black man who was killed in 2009 by police at the Fruitvale district station of the Bay Area Rapid Transit (BART) system in Oakland.

Starring Chiwetel Ejiofor, filmmaker Steve McQueen adapts the memoir of Solomon Northup – a free Black man who was kidnapped and sold into slavery in the American south in 1841.

Before he donned the mantle of the Black Panther, Chadwick Boseman played real life hero Jackie Robinson in the film "42." The film depicts the two years in which Robinson broke the sport's color barrier in Major League Baseball and the abuse he suffered from both fans and teammates along the way.

Loosely based on the real life of Eugene Allen, who worked in the White House for decades, the film stars Forest Whitaker as Cecil Gaines, a Black man who is a witness of notable political and social events of the 20th century during his 34-year tenure serving as a White House butler.

Selma chronicles the Selma to Montgomery marches led by Civil Rights activists such as Martin Luther King, Jr. The marches, held over a period of 18 days, aimed to secure equal voting rights and were met with violent resistance from local law enforcement. Starring David Oyelowo as Martin Luther King Jr., the film was directed by Ava DuVernay.

Starring Taraji P. Henson, Octavia Spencer and Janelle Monáe, "Hidden Figures" tells the story of three Black women at NASA who serve as the brains behind one of the greatest operations in history: the launch of astronaut John Glenn into orbit.

Starring Ruth Negga and Joel Edgerton, the film tells the true story of Richard and Mildred Loving whose interracial marriage would end with an historic 1967 Supreme Court decision.

"I Am Not Your Negro" is a documentary film directed by Raoul Peck, based on James Baldwin's unfinished manuscript "Remember This House." Narrated by Samuel L. Jackson, the film explores the history of racism in the United States through Baldwin's reminiscences of civil rights leaders Medgar Evers, Malcolm X, and Martin Luther King Jr., as well as his personal observations of American history.

Starring Denzel Washington and Viola Davis, "Fences" tells the story of Troy Maxson who makes his living as a sanitation worker in 1950s Pittsburgh. Bitter over his missed opportunities, he creates further tension in his family when he squashes his son's chance to meet a college football recruiter. The film was adapted from August Wilson's play "Fences."

'13th' is a documentary by Ava DuVernay that explores the intersection of race, justice, and mass incarceration in the United States. It's titled after the Thirteenth Amendment to the U.S. Constitution which abolished slavery throughout the United States and ended involuntary servitude except as a punishment for conviction of a crime. The film reportedly experienced a surge in viewership in June 2020 during the George Floyd protests.

Winner of the Academy Award for Best Picture, the film was written and directed by Barry Jenkins and is based on Tarell Alvin McCraney's unpublished semi-autobiographical play "In Moonlight Black Boys Look Blue." It stars Trevante Rhodes, André Holland, Janelle Monáe, Ashton Sanders, Jharrel Jerome, Naomie Harris, and Mahershala Ali. The film presents three stages in the life of the main character: his childhood, adolescence, and early adult life. It explores the difficulties he faces with his sexuality and identity, including the physical and emotional abuse he endures growing up.

A historical drama directed by Dee Rees based on the 2008 novel of the same name the film stars Jason Mitchell, Mary J. Blige, Carey Mulligan, Garrett Hedlund, Jason Clarke and Jonathan Banks. It film depicts two World War II veterans – one white, one Black – who return to rural Mississippi each to address racism and PTSD.

Written and directed by Jordan Peele in his directorial debut, the film stars Daniel Kaluuya, Allison Williams, Lil Rel Howery, Bradley Whitford and Catherine Keene. It tells the story of a young Black man who visits his white girlfriend's parents for the weekend, where his uneasiness about their reception of him eventually reaches a horrific boiling point.

As much a cultural touchstone as a film, Chadwick Boseman's portrayal as the now iconic superhero had much of the country talking upon its release. The film received numerous awards and nominations, with seven nominations at the 91st Academy Awards including Best Picture.

Directed by Spike Lee and starring John David Washington, the film is based on the 2014 memoir "Black Klansman" by Ron Stallworth. Set in the 1970s in Colorado Springs, the plot follows the first Black detective in the city's police department as he sets out to infiltrate and expose the local Ku Klux Klan chapter.

The biographical legal drama stars Michael B. Jordan and Jamie Foxx. It tells the true story of Walter McMillian, who, with the help of young defense attorney Bryan Stevenson, appeals his murder conviction. The film is based on the memoir of the same name, written by Stevenson.

Across a four-episode limited series, director Ava DuVernay tells the story of the "Central Park Five" – a group of Black boys who were falsely accused of raping a white woman in New York’s Central Park in 1989. The film charts the court case and charges that followed, and detail the institutional racism that led to their incarceration.

Starring Cynthia Erivo, the film tells the tale of Harriet Tubman's escape from slavery and transformation into one of America's greatest heroes, who went on to free hundreds of slaves from captivity.

Using interviews and rare archival footage, the documentary provides an intimate account of legendary U.S. Representative John Lewis’ life, legacy and more than 60 years of extraordinary activism — from the bold teenager on the front lines of the Civil Rights movement to the legislative powerhouse.

In what would be his final role Chadwick Boseman stars opposite Viola Davis in a film that depicts the rising tensions and temperatures at a Chicago music studio in 1927 when blues singer Ma Rainey joins her band for a recording session.