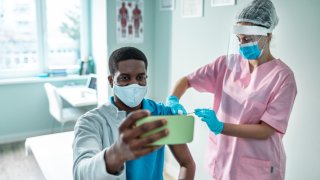 If you spend any time at all on social media you're likely seeing a new type of selfie on your feeds– friends, family and acquaintances with a rolled-up sleeve, bandage and vaccination card in hand. This isn't your typical self-promotion. For many of those posting it’s part of a conscious effort to promote public confidence in the coronavirus vaccines.

Amidst widespread misinformation about the vaccine online, vaccine selfies may be helping to dispel skepticism.  According to Harvard professor Bill Hanage in a new NBC News report, in order to stop the spread of the virus, close to 80% of the population needs to be immune. But only 63% of Americans in a recent NBCLX poll said they’ll definitely get the vaccine, and 17% are on the fence.

The idea of promoting vaccine confidence has historical precedent. In 1952, the polio epidemic afflicted almost 58,000 people in the United States at its peak. Even a year after virologist Jonas Salk developed a vaccine, there were over 15,000 cases, largely because immunization levels among American teens lagged at just 0.6 percent.

That changed when Elvis Presley famously posed for photos receiving his shot backstage at "The Ed Sullivan Show" in 1956. Within six months, vaccination rates had jumped to 80 percent of American youth. And by 1964, the number of cases overall had dropped to just 122 in the country.

Historians point out that our own social networks can have this kind of impact as well. In the 1950s, teen activists partnered with the National Foundation for Infantile Paralysis (now called March of Dimes) to organize dances called Salk Hops – a play on Dr. Jonas Salk and the popular “sock hop” dances of the time– that required proof of vaccination for free entry. They suggested that promotional materials should be “written by teens, for teens, with teen language” and partnered with local newspapers to spread the word.

In 2021, anyone with internet access can self-publish their own message. This is not to say that all vaccine selfies are equally effective. Photos with vaccination cards can unintentionally reveal personal details, making the selfie-taker vulnerable to scammers. And any expression of pain or illness could actively discourage those on the fence. Effective selfies project health and positivity. And the more people that take them, the more communities will be represented.

So feel free to take that selfie – just take care to keep your information private and try to smile under your mask.