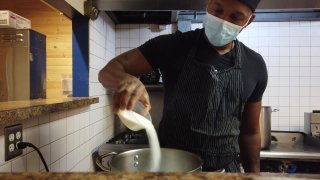 Pandemic or not, the show (er, shows) must go on.

In an effort to improve revenue during COVID-19, Seacoast Repertory Theatre is making an unusual change: The struggling theater is putting on three shows at once instead of just one.

Each show has a smaller cast, marketing director Brian Kelly said, and each cast never comes into contact with each other, reducing the risk of potential infections.

“We can't have, you know, 30 people on the stage at the same time singing without masks,” said Kelly. “Even one person in the cast gets COVID. You have to shut everything down.”

On The Rebound: How These Small Businesses Are Finding Renewed Purpose in a COVID-19 Environment

On the Rebound: Small Businesses Creatively Pivot in Wake of Pandemic Shutdown

The small local theater, nestled in the heart of Portsmouth, New Hampshire, has suffered many losses since the beginning of the pandemic. The business had to cancel 150 performances due to COVID-19, and lost half of their annual income.

Kelly is hoping that putting on multiple smaller shows will help ensure a steady stream of revenue.

But he knows the new feat is not going to be easy.

“Doing three shows at a time is slightly insane,” he said. “We're hoping we can fill these shows.”

When a tornado ripped through Chicago, Darnell Reed found himself worrying about more than just COVID-19.

“Hopefully everything else is okay,” the owner of Luella’s Southern Kitchen said. “And you know, what would suck is if a refrigerator went out or something like that.”

Luckily, Luella’s Southern Kitchen emerged unscathed -- and Reed was able to turn his focus over to enhancing the restaurant’s brunch menu.

Since the onset of the pandemic, Luella’s Southern Kitchen made several changes, including making sure hand sanitizer stations were available outside of the bathrooms. With new safety and cleaning protocols, Luella’s was able to bring back some beloved traditions, including brunch.

“I'm hoping now that we have gained some new customers that maybe that'll increase our brunch a little bit,” Reed said.

Being in the midst of a social justice movement, Reed said he’s been receiving support as a Black-owned business.

“During the protests there has been a surge and it's been very trendy to support Black-owned businesses,” he said. “And I use the word trendy, but hoping it's not going to be just a trend, it'll be a way of life, because we as all business owners and we all need support.”

“There Is Good Out of This Pandemic.”

L.A. Dogworks may have lost customers (and dogs) due to COVID-19, but the small business is trying to turn a negative into a positive.

“They're going to do exercise, physical things. There's a thing called a climb, which is like a little pedestal. Teach them how to get on that. How do you use that,” he said. “There'll be a little bit of training involved as well.”

Previously, dogs “ran amok” at the indoor dog park, Rosenthal said. The pandemic is giving him the opportunity to develop a program that is more mentally stimulating for the four-legged friends -- and reception so far has been overwhelmingly positive.

“People were really happy,” he said. “And they found that their dogs were just as tired, if not more, as if they had been running around all day.”

Despite going from 70 or 80 dogs to about 30, Rosenthal is optimistic about the future.

“Now we have less dogs so we were able to start this new program,” he said. “So there is good out of this pandemic.”