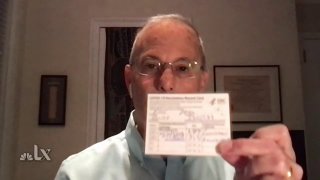 Utter the words 'vaccine passport' in the wrong company and get ready for a fight... or at the very least a disdainful glare. The concept of a vaccine passport has become the latest casualty in the Red state/Blue state divide over COVID-19. It's the same debate that turned the idea of wearing masks into a political battle between Democrats and Republicans.

What Is a Vaccine Passport?

Vaccine passports show whether someone has been vaccinated or recently tested negative for COVID-19. A COVID passport could allow people who can prove they’ve received the full dose — or have already survived the disease and may have immunity that way — to travel with fewer restrictions, attend concerts or sporting events without getting tested.

There's a Ketchup Packet Shortage, So Try These 7 Other Options for Your Fries

‘Mommy Juice' Might Be a Pandemic Stress-Reliever, But It's Killing Women

While there has been much debate about them, they currently only exist in New York via a government-sponsored smartphone app produced in partnership with a private company. Madison Square Garden has been one of the test sites for the Excelsior Pass, an effort by New York state-based on technology from IBM.

But despite their limited use, this hasn't stopped Republicans across the country from pursuing proposals to ban their use.

How Do They Work?

Vaccine passports are typically an app with a code that verifies whether someone has been vaccinated or recently tested negative for COVID-19. They are already in use in Israel and under development in parts of Europe.

Fliers download the app on their phone, snap a selfie and scan their passport to verify their identity. Those who are vaccinated can upload a copy of their vaccination certificate or, in destinations that require it, book a COVID-19 test at an approved lab. The results will automatically appear in the app.

Americans who get COVID-19 vaccinations receive a vaccine record card from the Centers for Disease Control and Prevention, but it's not intended to be used as a "vaccine passport." The card is easily forged so it's not enough to prove that someone is fully vaccinated

Why Are They Controversial?

Supporters of vaccine passports argue they are similar to other safety measures for schools and overseas travel that require proof of immunization against various diseases.

But Republicans from across the country have come out vocally against them, portraying vaccine passports as a heavy-handed intrusion into personal freedom and private health choices.

In Florida, Gov. Ron DeSantis signed an executive order stating no governmental entity may issue a vaccine passport, and businesses in that state can’t require them. Tennessee Gov. Bill Lee has advocated against vaccine passports. A bill introduced in the Arkansas Legislature would prevent government officials from requiring vaccine passports for any reason. And controversial U.S. Rep. Marjorie Taylor Greene, R-Georgia, told her supporters on Facebook last week that “something called a vaccine passport” was a form of “corporate communism” and part of a Democratic effort to control people’s lives.

President Joe Biden's administration has largely taken a hands-off approach on vaccine passports. Jen Psaki, the White House press secretary, said in a briefing last week that the administration is not planning a central federal vaccinations database. "Development of a vaccine passport, or whatever you want to call it, will be driven by the private sector," Psaki said.

A.J. Bauer is an assistant professor of journalism and creative media at the University of Alabama who studies the conservative media landscape. Bauer says the fear surrounding vaccine passports ultimately boils down to fear of exclusion.

"There are already many aspects of life where you have to show vaccination. If you're a student in order to live in dorms many universities require you to get the meningitis vaccine in order to enroll in school or provide proof saying that you don't have that. So this is very similar to that," says Bauer.

"The only distinction is that it's expanding the requirement of vaccines for spaces where those sorts of requirements haven't typically been. Typically, you don't need to have a vaccine to go to a baseball game or to go to a movie. I think the fear among conservatives other vaccine skeptics is that they're going to be unable to participate. They're afraid that they're going to be left out of the kind of new normal."

Brian Castrucci is an epidemiologist, public health practitioner and president and CEO of the de Beaumont Foundation. Castrucci recently penned an Op-Ed for CNBC where he said the very terminology of a 'vaccine passport' was problematic. "Calling it a 'passport' pushes every partizan political button on the right."

"There is a definitive public health need for some type of requirement of proof of vaccination, but it has to be messaged correctly," Castrucci told NBCLX. "But now, because of the political issue, a very useful public health tool is now no longer available in states like Florida or Georgia because we are continuing to politicize a nationwide public health crisis."

Castrucci said instead of a public health debate too many are now having a federalism debate about government overreach. "And I would like to at some point keep federalism out of our health," he said. "There are far too many people that have died from COVID and a contributing cause of death is our partisan divide. You need to let state and local public health leaders do their job."

Bauer is hopeful that if vaccine passports do become more prevalent, they may push vaccine skeptics off the fence and into a pharmacy to get a shot.

"One of the benefits of vaccine certification is it gives an additional incentive for people who may be vaccine skeptical to go ahead and get one," says Bauer. "Let's say I'm vaccine skeptical but I love going on cruises. I think they're the most fun form of entertainment in the world and I go with my family every year. But if Carnival Cruises says you can't go on our boats unless you can prove you've been vaccinated. If my desire to go cruising is higher than my skepticism, of vaccination, it might send me to get vaccinated even begrudgingly. It doesn't matter whether the vaccination was begrudging or not. It's the fact that you've got it."