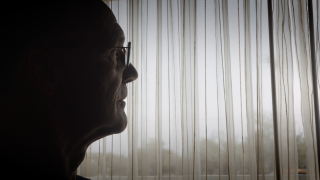 In September 2021, NBCLX Storyteller Cody Broadway travelled from Los Angeles to his hometown of San Angelo, Texas. He had been following the impact of COVID-19 on the community where he was raised and hearing about the personal toll it was taking on his own family, friends, and former colleagues. He wanted to see for himself why this city of 100,000, and the biggest one in the state without an interstate, was struggling to contain the pandemic. What he found was as much of an ideological battle as a biological one with misinformation driving a wedge between neighbors, friends and family. We sat down to speak to Cody to ask about his 4-part docu-series “Dying to Be Wrong: The Price of COVID Misinformation.”

Note: This interview has been edited and condensed for clarity.

Q: Cody, what inspired you to take on this project?

A: Since the beginning of a pandemic, one of the things that I've been watching closely is the virus's impact on my family and hometown of San Angelo, Texas. With the first wave, San Angelo wasn't impacted at all. However, these last two waves have hit closer to home. I have had friends, family members, classmates, and even a former boss come down with COVID. Some have even died. This has inspired me to take my talents and abilities to do what I can to help my hometown and others like it.

For the residents of San Angelo, Texas, recently the fastest growing Texas city for COVID-19 cases, personal responsibility can mean the difference between life and death. On one side of the debate dividing neighbors in the Texas city is Caleb Wallace, who believes public health protections are taking away his freedoms. On the other side is Zach Shutterfield, seriously burned in an arson fire and at severe risk of COVID, who can only hope his neighbors take steps to keep him safe. This is episode 1 of “Dying to Be Wrong,” a four-part mini-documentary series, by NBCLX storyteller Cody Broadway. Watch the full series at lx.com/dyingtobewrong

Q: Did you have any sense of what you were getting yourself into?

A: I remembered I pitched the idea; I sat back and thought, how will I tell this story? I felt like this was an opportunity to hold up a mirror to the residents and potentially help people impacted by this pandemic. Once I started digging and getting into it, it turned out to be even more profound. I realized the world that some had built around social media played a role in responding to the pandemic. Unfortunately, some may have been impacted by the spread of misinformation.

Q: One of the things that struck me with the series is that in a lot of ways San Angelo is a small town. Everyone seems to know each other and sees each other on a regular basis, and this got really personal.

A: The mayor hit it on the head with the Caleb Wallace story. Caleb Wallace disagreed with the mayor and her leadership on what she was and wasn't doing. He was very vocal about it in November 2020 at a COVID city update meeting. Months later, during a major ice storm, the mayor wanted to go door to door to check on residents. The person that drove her on that day was Caleb Wallace, the same person that confronted her months prior. They found a way to put differences aside for the better good of the community, and that's what San Angelo does, especially in times of need and tragedy. The community rallies around to help one another.

In September 2021, San Angelo, Texas, was considered the fastest growing Texas city for COVID-19 cases. With the latest surge of the delta variant, more than 100 people have lost their lives to the virus since the beginning of August. How did we get here? Episode 2 of “Dying to Be Wrong,” a four-part mini-documentary series by NBCLX storyteller Cody Broadway, looks back at the past 18 months in San Angelo — which started with parking lot prayers for healthcare heroes and ended with accusations and hostility toward local health officials. Watch the full series at lx.com/dyingtobewrong

Q: So how does a tight knit community that often comes together in times of crisis get so split apart during the pandemic?

A: I remember talking to Bishop Michael Sis and other church leaders there, and they said the issue they have noticed is that people stopped talking and listening to each other. It's easy for people to go on social media and share thoughts and comments about something they disagree with, but that doesn't seem to be happening in person.

Q: Did you come away after your time there with any hope that there's a way to bridge that divide?

A:I think there is, and I think it's going to take time. It may not be an overnight thing as far as coming together. My biggest fear is that the pandemic will end, but the divide will remain in some shape. Everyone in San Angelo seems to know everyone, and in west Texas, they do rally together in tough times. The conversations need to start happening beyond a Facebook post. The daily cases and deaths are people with a family that is hurting. It's easy to be numb to the numbers and for the conversations to stop there. In the final episode, I leave it on the idea of communication continuing in hopes that actions will be taken beyond this docuseries.

"Faith over fear" is a common expression among residents in San Angelo, Texas, which was considered the fastest growing Texas city for COVID-19 cases in September 2021. In episode 3 of “Dying to Be Wrong,” a four-part mini-documentary series, NBCLX storyteller Cody Broadway tells stories of faith and fear - from a vaccinated preacher's death to the stress funeral homes and priests have suffered after a rise in cases. Watch the full series at lx.com/dyingtobewrong

Q: How do you think we got to this point?

A: I think it's the downside of social media. Social media brings so many of my friends and family members together, and I love it! But I also see the divide it makes among communities and even households. We are in a time where misinformation can have a tragic ending if we aren't careful. We can choose to mute people we disagree with and only follow those that think like us—creating an echo chamber benefiting us and our views. But what happens if that information is wrong? We must be cautious with the type of information we surround ourselves with.

Q: We are now approaching year two of the pandemic. How can people not believe that this is a serious health threat?

A: Unlike a tornado where you can see the material damage from the natural disaster, the virus is invisible, which does something psychologically. For some, it's easy to put it in the back of our minds and live our lives. Until you're faced with it directly, one response that I kept hearing was faith over fear, and I see that on social media as well. But unfortunately, according to the religious leaders I spoke with, that doesn't make the virus less real.

Q: What is the Church’s position on this in San Angelo?

A: Both religious leaders said that God and science went hand in hand and that God gave us a heart, but he also gave us a mind.  Bishop Michael Sis talked about how many people inside the church don't agree with one another. Those that are for the common good of others agree with the masks, while others that believe more in personal liberties seem to be against the idea of masks. So, there's even a divide within the church.

In San Angelo, Texas, recently the fastest growing Texas city for COVID-19 cases, "I saw it on social media” is a statement often heard by community leaders trying to fight the pandemic. In episode 4 of “Dying to Be Wrong,” the final installment of a four-part mini-documentary series, NBCLX storyteller Cody Broadway explores how social media changed how some residents perceived medical advice and the divide it created among the close-knit community of San Angelo, Texas. Watch the full series at lx.com/dyingtobewrong

Q: What’s the message you want people to take away from this series?

A: Life can change instantly, especially when it comes to this virus. I think that we're all tired of living with the virus. COVID fatigue is real, and it's hitting a lot of us hard, myself included. But I want people to realize that these "numbers" are moms, dads, brothers, sisters, daughters, and sons. These are actual people with a family left behind. I hope this story helps bring people closer together in fighting this virus.

Want to hear more of the story? Subscribe to our new podcast for exclusive new reporting and commentary about the battle against COVID-19 misinformation in San Angelo, Texas. Listen to episode 1 below and subscribe HERE.