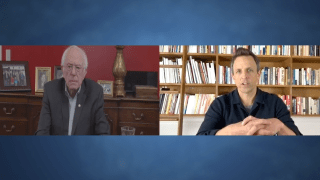 Sen. Bernie Sanders, I-Vt., appeared on "Late Night With Seth Meyers" Monday night and said that he could still become the Democratic presidential nominee despite trailing in the race so far.

Although Sanders is some 300 delegates behind former Vice President Joe Biden, the senator told Meyers in a Skype interview from his Burlington home he sees a "narrow" way he could win the nomination.

"It is admittedly a narrow path but I would tell you, Seth, that there are a lot of people who are supporting me," Sanders said. "We have a strong grassroots movement who believe that we have got to stay in, in order to continue the fight to make the world know that we need Medicare for All, that we need to raise the minimum wage to a living wage, that we need paid family and medical leave…"

Also vital to his campaign -- Sanders' digital operation, now that all of his rallies and other events have been canceled amid the coronavirus pandemic. And, he says, his campaign has been successful, with each of his livestream events getting a few million views.

"So we have put a lot of resources into that. We do it pretty well and, you know, I think we do have an advantage over other folks in that regard," he said.

Meyers asked Sanders about his demeanor on the floor of the Senate last week as Congress rushed to pass a massive $2.2 trillion coronavirus relief bill. Sanders said he was being sarcastic because of the "simmering rage" he felt towards fellow senators who questioned the aid.

"We had some of my Republican colleagues that said, 'Imagine, there would be some low-income workers who would actually earn more from their unemployment check than they previously did when they were making, you know, 10, 12 bucks an hour, we can't allow that to happen.' And to me that is so ugly, so grotesque, so immoral, that I felt compelled to speak out about it," he said.

Monday night's show was Meyers' first time back on television since the coronavirus outbreak began.