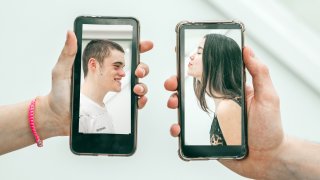 When fictional sex columnist Carrie Bradshaw envisioned the perfect recipe for relationships in “Sex and the City,” she never could have anticipated the obstacles that singles would be facing in 2020. The COVID-19 pandemic has led to a seismic shift in the dating landscape and the way singles interact with others in a romantic setting.

Case in point. Victoria LaVilla is a 38-year-old production executive in Manhattan, but has been quarantining in her hometown of Rochester, New York since mid-March. LaVilla, single since August 2018, would regularly go on dates before the pandemic hit the Big Apple.

“After spending some time alone, I decided to put myself out there. I was excited about the prospect of dating and started to navigate the challenges and complexities that come with it.  But in this environment, it feels a little hopeless,” she said.

As Fertility Treatments Are Frozen by the Pandemic, Couples Are Left in Limbo

Jaymes Jorsling, an actor and writer from Brooklyn, New York is also navigating the world of dating during the pandemic. Much like LaVilla, Jorsling was hesitant to put himself out there at first due to safety concerns. “We didn’t know what we were facing and the number of COVID-19 cases were so high,” he said.

Jorsling, 51, says now he takes delight in determining if a person can hold a conversation without being immediately distracted by the physical aspects of dating. “Lots of talking on the phone in the beginning of a relationship really allows you to get to know a person on a deeper level,” he said.

Life coach and relationship therapist Wendy Petties specializes in topics that many may feel uncomfortable discussing openly, including sex, money and race issues.

With sex always a hot-button topic, Petties says singles are lonelier than ever as dating has become extremely challenging during the pandemic.

“When people were first coming to me, they were really afraid. They were completely starved for touch and a sense of connection,” she said.

LaVilla has been relying on dating apps since returning to her hometown of Rochester at the start of the pandemic. “I was doing Zoom calls from Rochester with people in New York City, but stopped because as time went on, they wanted to meet in-person and I was still in Rochester. I decided to switch my location on my apps to Rochester,” she said.

“The Zoom calls finally stopped, and I go on dates in parks or at the beach now. I never meet people inside a restaurant or a bar,” said LaVilla.

Singles who are starting to meet in person, are finding themselves asking the tough questions early on, such as “Have you been wearing a mask regularly?” or “Do we have similar views on the pandemic?”

Jorsling had his first in-person date since March in Brooklyn’s Prospect Park. He said both he and his date wore masks and tried to make the best of a less-than-ideal situation. Jorsling shared a few good laughs and called the date a success, despite the lack of physical contact.

Jorsling’s advice to his fellow singles is “don’t shut down. Don’t do nothing. Nothing should stop us from living. It’s time to get creative!”

Yet, the stress of meeting during the current pandemic has weighed heavily on the mental health of many. “The whole pandemic is a layer of getting in tune with fear of the unknown and a lack of control,” Petties said. She believes people who are single or not living with a significant other are having a particularly hard time because they are forced to face these emotions alone.

Petties is offering feel-good solutions to help singles like LaVilla combat these empty feelings. “Take pleasure in the things you have to do,” she said. “If you are starved for connection, take an extra five minutes in the shower where you let the water roll over your body. Use your senses to relax and revitalize.”

In terms of dating apps, Petties says these have just recently started to resurface as many singles were going stir crazy after feeling trapped for months. But even dating apps are being screened in a completely different way as COVID-19 has caused singles to become more cautious and selective in their search for finding potential partners.

And as many people are still hesitant to meet face-to-face, Petties suggests participating in virtual distancing dates or speed dating. She also urges singles to get creative and most importantly, not to lose their sense of humor despite current circumstances.

In the words of Carrie Bradshaw, “eventually all the pieces fall into place. Until then, laugh at the confusion, live for the moment, and know that everything happens for a reason.”