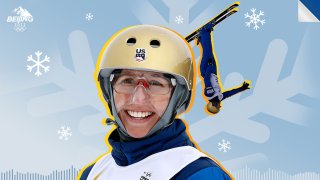 It was either this or potatoes.

When Winter Vinecki’s mother Dr. Dawn Estelle was expecting, she didn’t find out the sex of her kids.

“You know, if I'm going to go through all this work of carrying a baby and going through the pain of labor, I want some surprise at the end,” she said.

So Dawn and Michael Vinecki chose a male name and a female name, and waited for their child to be born.

Had Winter Vinecki been born male and named Yukon, you’d probably be reading about the (to our knowledge) second-ever winter Olympian named after potatoes right now.

You can probably guess how it turned out.

Winter Vinecki, a U.S. aerials skier who qualified for the Beijing Olympics, joined hosts Apolo Ohno and Ngozi Ekeledo for episode 2 of this season of My New Favorite Olympian, a podcast from NBCLX.

Get Ready for Season 2 of My New Favorite Olympian

Ngozi and Apolo heard more from Winter about raising $500,000 for research into prostate cancer, the disease that killed her dad, Michael; running all across the world in marathons on all seven continents (yes, including Antarctica); and of course, how Vinecki got her name.

To hear the full episode and automatically download future episodes, subscribe to My New Favorite Olympian here wherever you get your podcasts.

Vinecki got started competing early in life, running her first 5K race at just 5 years old. By age 10, she had done a 10-mile race and was getting into half-marathons and marathons.

“I loved being out there and running. It was freeing. It was something anyone could do,” Vinecki said.

Eventually, the family received a shocking diagnosis. Michael had a rare sarcoma, a form of cancer, that was spreading to other parts of his body.

The family started making weekly trips from Michigan to the Mayo Clinic in Minnesota. That didn’t stop Vinecki from running.

Vinecki wanted to do something positive with her running that could help her dad or other prostate cancer patients, so she in 2008 started Team Winter, a nonprofit to raise money and awareness. She made a speech for the Prostate Cancer Foundation fundraising gala, donated trophies to patients and raised more than $100,000 in the first year.

In total, she has raised $500,000 for prostate cancer research and is still raising today in honor of her dad, Michael Vinecki, a musician and auctioneer, who died March 12, 2009, at age 40. Vinecki remembers him playing with soundboards, going on snowmobiling trips and taking the family to races.

“All of the Iron Kids triathlon titles and national championships, all the speaking engagements that she does, her dream to get to the Olympics and to stand on Olympic podium is for her dad and the men affected by prostate cancer and their families,” Dawn said. “It's never about her. It's about saving lives and helping other families.”

How Winter Vinecki got her name

If Winter Vinecki makes the Winter Olympics in Beijing, she will be the first Olympian named Winter. But why did her parents want to name her Yukon if she were male?

“Not for Yukon Cornelius and Rudolph [the Red-Nosed Reindeer], not for the Yukon Territory, but Yukon gold is a type of potato,” Dawn said. That variety is grown in northern Michigan, where generations of the Vinecki family come from.

Coincidentally, there has been one other winter athlete named Yukon, and he was also an aerials skier.

Before Vinecki qualified for the Olympics, she said making it there would be "a dream come true."

“I've always wanted to be an Olympian and compete for USA on the biggest stage in the world. I didn't know if it was going to be in ski racing, in triathlons, running, whatever it may be, but I knew I wanted to be out there and to compete my heart out, to do the best that I possibly could in something, and to be able to use my platform as an athlete to help others,” Vinecki said.

“I just love being able to inspire others to chase after their dreams. So if I do get to that Olympics this year, it will just be surreal and a dream come true.”

For Winter's full story, listen to Season 2, Episode 2 of the My New Favorite Olympian Podcast from NBCLX.